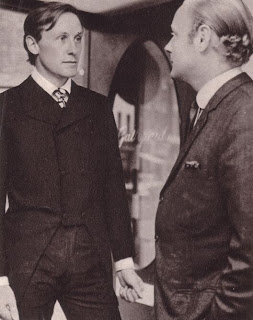 Tailoring establishment known as Blades was started in 1962 by three partners: Rupert Lycett-Green - a 22 year old ex-Etonian with aristocratic connections, Eric Joy - a cutter from Clerkenwell, and an accountant Charlie Hornby. They specialized in bespoke suits, but they were also selling ready-to-wear ones in their shop on Dover Street. Although as far as prices were concerned , they were at the same level as Savile Row (around £60 for a suit), their clothes were far more modern and innovative. The early success of Blades was a result of combining the novelty of clothes from Carnaby Street with the quality and fine tailoring than has been a trademark of Savile Row. The man responsible for this success was cutter Eric Joy. As Nik Cohn wrote: Before this, if you'd wanted to dress adventurously, you travelled to Carnaby Street and suffered agonies of bad fit and tightness. Now Joy would make you look just as wild and you'd be comfortable as well (Nik Cohn, Today There Are No Gentlemen, p 98). But it was the designer and owner, Rupert Lycett-Green who gave Blades the most publicity.

Lycett-Green might have not been the first aristocrat who invested in tailoring, but he certainly was the first who was doing it so openly. His good looks and impeccable style also played important role in his success. Nik Cohn on Lycett-Green: Very tall and very skinny, he was married to John Betjeman's daughter and was charming, quick with a quote and well equipped with enemies. All in all, he was a columnist's dream (Cohn, p 98).
Despite all this Blades made made hardly any money during first few years of existence.In 1965 the shop was faced with an uncertain future when Charlie Hornby left, and was quickly followed by Eric Joy (who went to work for Mr. Fish before opening his own shop in Cork Street).Rupert Lycett-Green was faced with a dilemma.As he remembers: In 1965, I asked myself , am I going to start doing this properly or should I get out? - and I decided to carry on. So I moved to Savile Row and became a professional (Cohn, p 99). His new shop was situated at 8 Burlington Gardens, in Georgian townhouse that overlooked one end of Savile Row. The atmosphere in this discreet new location resembled more gentlemen's club rather than tailoring shop. This brave move was a form of a challenge. 'Hip' new tailors took on conservative 'old guard' of Savile Row. 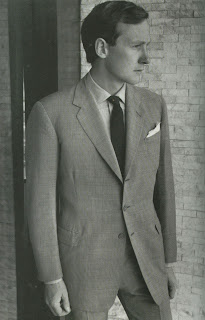 In Burlington Gardens, Lycett-Green started putting more emphasis on himself as a progressive designer rather than on Blades as tailoring venture. Apart from suits, Blades was now also selling coats, shirts and various accessories. Keeping up with rapidly changing fashions , by 1967 Blades started offering 'bespoke hippie gear'. Nik Cohn described it as a period of utter disaster. He wrote: Not wishing to be left behind, Lycett-Green began feverishly to turn out fancy dress - kaftans  and fringes and Nehru suits, the full psychedelic production. Rupert Lycett-Green in a Blades suit that must have given old tailors of Savile Row heart attacks. The lady in the photo is Lycett-Green's wife, Candida. (1967)

Financially it worked. The press still loved him and his turnover rose to £200.000 a year. But clownishness was not truly his style, and he found himself continually outgimmicked and out-outraged by Mr. Fish, just around the corner. In the end, he gave up and reverted to what he did best, well-cut and unfussed suits, knocked down for £100 a time (Cohn, p 100).
Although Lycett-Green returned to simplicity, he stayed innovative and in touch with latest male fashions. The combination of velvet suits with Liberty print shirts was one of his specialties. 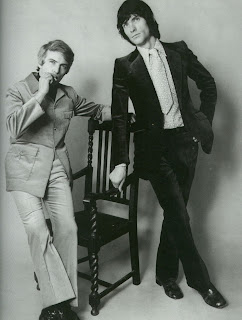 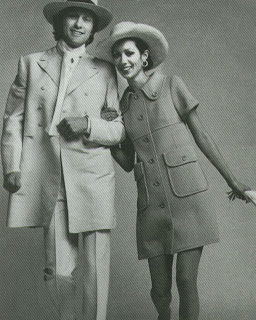 On the left: Typical late-1960's suit from Blades - double breasted and with wide lapels.

Blades held first ever ready-to-wear men's fashion show in Savile Row in 1967. It was a great publicity stunt and it received a lot of press attention. It also caused the outrage of future Prime Minister Edward Heath who lived in Albany apartments adjoining Burlington Gardens and made a formal complaint about the noise.

By the late 1960's, Blades was more successful than any tailoring establishment fin Savile Row. There is nothing in all London as elegant and as wearable as the simple Blades suit -announced The Times in March 1969. In the same year Blades opened a branch in New York on Madison Avenue, right opposite the New York branch of uber-hip London boutique Annacat. Unlike Annacat though, which closed after few months, Blades remained opened for four years.

As for Blades' attempt to challenge the old Savile Row, it was more than successful. Nik Cohn wrote: Savile Row, at first was unimpressed by Rupert Lycett-Green (...) For five years, the established firms sat back smug and waited for the upstarts to collapse, and for Carnaby Street to come to nothing, and for everything to return to pre-war sanity. By the time they saw it wasn't going to happen like that, most of their younger customers had left them (...) By 1970, if it hadn't been for the American tourist trade, Savile Row would have been a wreck (Cohn, p 101).

About Lycett-Green, Nik Cohn wrote: His reputation varies. One view puts him very high indeed, possibly the best designer in England; another dismisses him altogether, giving all the credit to Joy and to the ideas of customers like Christopher Gibbs and Michael Rainey. For myself, I'd put him about halfway: a good shopkeeper and clever self-publicist, but with undue pretensions. What is certain, however is that Blades itself had mattered. (Cohn, p 100).

Lycett-Green remained in business much longer that any other innovative 1960's menswear designer. He sold Blades in 1980. Of his reasons he said: I sometimes think I was put out of business by people like Giorgio Armani. Not literally, of course. But while our clothes were well made and expensive, I just couldn't see how to diversify so as to compete effectively (...) I thought, if Armani is going to be the man of the future, where am I? The writing was on the wall. I thought, this is the moment to get out. Otherwise I am going to have a bespoke, slim suit, tailoring business and I will be sitting here for 20 years waiting for the business to come back. I was 41 and still young enough to do something else (Geoffrey Aquilina Ross, The Day Of The Peacock, p 102).
Today, Rupert Lycett-Green is a chairman of oil exploration and production company. He has his place in fashion history however, as the innovative 1960's menswear designer, and a man who, along with Michael Fish and Doug Hayward brought colour, originality and freshness into the British bespoke tailoring.

Blades suit from 1968 displayed in Victoria and Albert Museum.

The pant is similar to western style with one pleat, two pleats or without pleats.