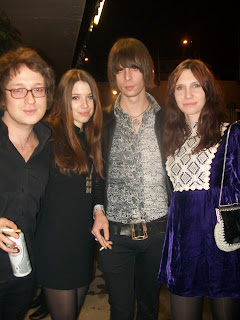 Here are some photos  I took at the New Untouchables NYE party at 229 in London. When I go to NUTS, taking photos is never a big priority, which should explain why my photos are low in number and poor in quality. They should however, give you a general idea of how much effort NUTS regulars put to recreate various 60's fashions. Among hundreds of Mods in sharp suits, I spotted quite a few people dressed in psychedelic/peacock style. 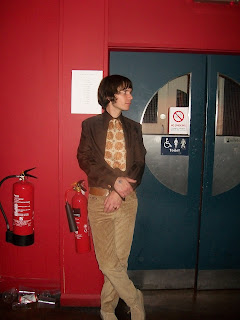 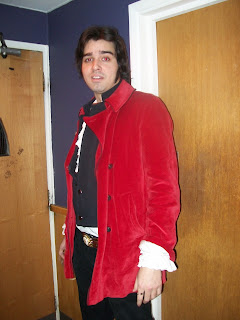 This double breasted jacket is from Pretty Green - Liam Gallagher's boutique. It will set you back a considerable £540. 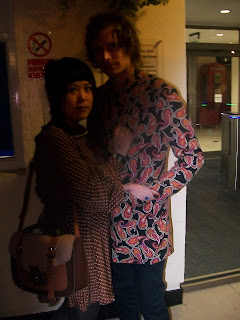 The clubnight was traditionally divided between 3 rooms: Beat/Psych room (where we spent most of the evening), Northern Soul room and Skinhead/Ska room. The rooms were not synchronized as far as time was concerned, which gave us a rare opportunity of witnessing two New Year countdowns - first in beat room and then in soul room. Apart from top dj's of London Mod scene, the other attraction of the evening was a tribute band to The Small Faces called The Small Fakers who performed Small Faces' classic 1968 album 'Odgen's Nut Gone Flake' in its entirety, as well as a few hit singles such as 'Whatcha Gonna Do About It' or 'Tin Soldier'. 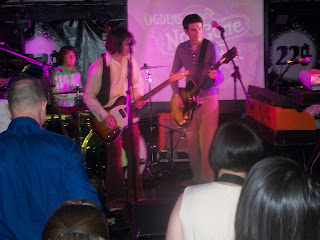 The Small Fakers
Although it was a great evening, I, personally left the venue feeling slightly 'unfulfilled'. In spite of having quite a good knowledge of sixties psych/garage music, throughout the six or seven hours I spent there, I have only heard about six songs I actually knew. Despite being used to the fact that at NUTS dj's often compete with each other to see who will play the rarest and the most obscure records, I find it slightly irritating, that they treat their dj sets solely as an opportunity of 'displaying' their expensive record collections. They seem to forget that people come to those clubnights to dance, not to admire taste and musical knowledge of the dj's. I quietly hoped that on NYE, the 'obscure stuff only' rule would be loosen up a little, but clearly I was wrong. I did not expect to hear Beatles or Stones, not even The Seeds or Electric Prunes, but surely throwing 'I Cannot Stop You' by Cherry Slush, or 'A Question of Temperature' by Balloon Farm (which I heard on past NUTS nights)  wouldn't destroy dj's credibility.I realize of course, that the dj's (most of whom had been on the 'scene' for decades) might be bored of playing certain songs,but after all, djing is not always about playing songs YOU want to play. Sometimes you have to play a song you hate, or are bored of. I feel strongly about it, because, as a 60's Psych/Garage obsessive, I rarely have opportunity of hearing my favorite songs in the club. And I think the fact that I spent money on the ticket and travelled all the way from Brighton gives me a right to complain.
Despite all this, I am sure I will be coming to the future NUTS clubnights, and I encourage any other 60's obsessive to do the same (after all, my criticisms are based on my personal taste). I certainly look forward to their Easter event on the the 6th of April when they are putting on The Pretty Things, Crazy World of Arthur Brown and recently reformed July. This amazing line-up will be followed by all-night psychedelic freakout inspired by legendary UFO events at Roundhouse in 1967. 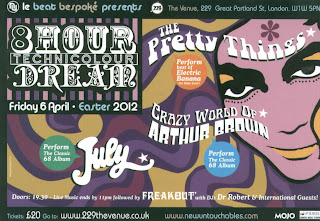 Owehh! Love it around here. I'll totally come back here

Oh nice to see mention of the Small Fakers. Not really a big fan of tribute bands but I saw them a little while back at the 100 Club, doing 'Ogden's...' too (complete with narrative from Stanley Unwin's son!) after which Ali McKenzie guested and they did some Birds' numbers, great stuff. They're truly good value for money!

It seems like it was a GREAT party ! Love it :)