The Sweet Shop and Chelsea in the 1960's by Laura Jamieson 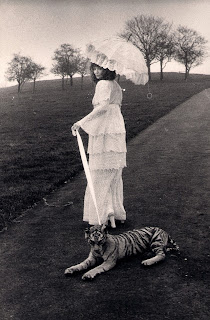 Recently, I have been contacted via e-mail by Laura Jamieson - a designer, who in late 1960's ran a boutique in Chelsea called The Sweet Shop. Ms Jamieson shared with me some of her memories from her time as the owner of The Sweet Shop as well as the photos of the amazing clothes she designed worn by top models and pop stars of 1960's London. I am sure that the readers of this blog will find this 'mini - memoir' very interesting:

" I left Chelsea School of Art in 1965 then did a post graduate at Horsey College of Art for year. I started my own collection of knitwear selling to  boutiques in the Kings Road and to Alice Pollock and Ossie Clark's Quorum in  Radnor Walk.  I then rented a building in Blantyre Street from the council at £7 per week, a shop with rooms above and opened The Sweet Shop in 1967. Trevor Miles did some of the designs and I also produced my own designs using outworkers and turning the basement into a workroom. Trevor Miles left to work with Tommy Roberts and they opened Mr. Freedom in the King's Road. Then Willy Daly came on board as production manager -  he was working with Ossie Clark until he joined The Sweet Shop. The medieval theme just evolved and I think we were original in using silk velvets, patchwork with appliques of Iconic medieval  and space age themes. Dresses sold for £35 and men's velvet tunics £25. Floor cushions £60 Wall hangings £200. The outside of the shop was boarded and painted white initially and, as we were off the beaten track, it was only fashion and style insiders who knew about us, though the shop eventually got loads of publicity in  Daily Press and Vogue. 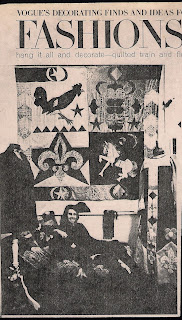 Interior of The Sweet Shop in Vogue Magazine 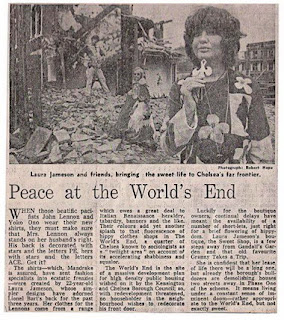 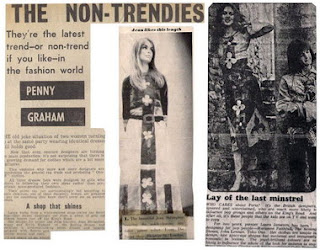 In fact, I did Grace Coddington's wedding dress when she married Michael Chow - her first husband. Fashion historians and academics have not heard of The Sweet Shop as it was quite ethereal only known to the in-crowd and did not have visibility such as Granny Takes A Trip on the King's Road. Eventually the shop front was painted  with strange little running men by Martin Sharp who is now an artist of renown in Australia he worked for OZ magazine and  shared a studio flat with Eric Clapton at the Peasantry in the King's Road. 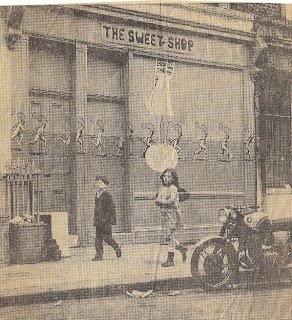 Once inside the shop there were huge floor cushions, wall hangings, and clothes hung from the ceilings and adorned the walls more like an art installation. It was a social hub and friends and customers mingled, they sat on  velvet floor cushions drinking jasmine tea while listening to sounds of Bob Dylan playing on an old record player hidden behind Victorian screen and the scent of incense filled the room. It was all very atmospheric and exotic and fun unlike the corporates fringing the King's Road today. Here Julie Christie, Twiggy and Justin, Jean Shrimpton, Lionel Bart, Syd Barrett, Jefferson Airplane, Tyrannosaurus Rex, Keith Richards et al and, local aristocrats and hippies mingled. 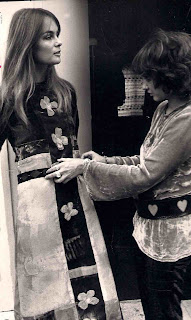 Jean Shrimpton wearing dress from The Sweet Shop, with Laura Jamieson (right), circa 1968. 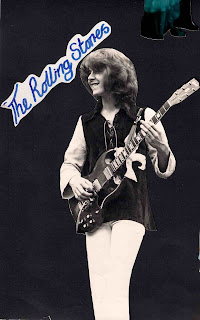 Mick Taylor wearing a shirt from The Sweet Shop
A Sweet Shop opened in New York at East 53 rd Street in 1969. In 1970 we had to move out of Blantyre Street because the council wanted to redeveloped the area: little Victorian houses and shop gave way to The High rise Worlds End Estate and unfortunately we had to get serious backing because of the new high rent when the shop was relocated to Sydney Street. In 1971 the backers went  bust so The Sweet Shop had to close. I think in a way it was the end of an era which gave way to punk and the three day week. The social  hippy revolution "make love not war", flower power and "the summer of love" got commercialized by vested interests into Swinging London and by then even bank clerks were growing their hair long. The Sweet Shop was very much part of a creative force at that time where Chelsea aristocrats, film stars, models, photographers  mingled in one movement which set London as the power house of creativity that spread into every aspect of design it was a time a freedom and innovation which we do not see today, because everything now has a price and very little value. 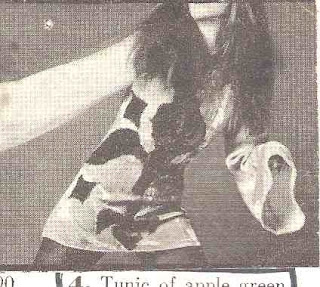 Above: Appliqued tunic in silk velvet. Below: Some of medieval-style dresses designed by Laura Jamieson for The Sweet Shop from around 1968 - 1969. 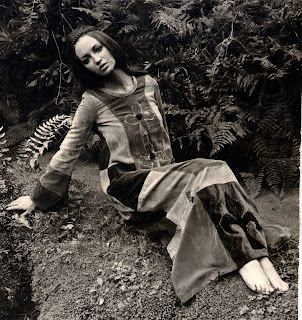 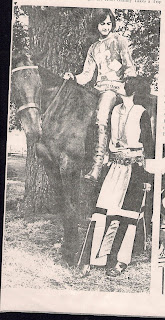 I went on to do collections for Rome, designs for "Hair" in Paris. Then film with Kenneth Anger,  "Lucifer Rising" where I had a free reign. We did some of the filming at the country house of style doyenne Christopher Gibbs and starring Marianne Faithful and Keith Richards. Kenneth had a very stylish flat in Mayfair filled with Egyptology and occult accessories. He was, as far as I knew him, very into Alistair Crowley but he was very nice and not at all menacing.
Lucifer Rising  - Kenneth Anger's infamous art-house masterpiece and his tribute to Alistair Crowley. Shot in 1971 , but released in 1980. Costumes by Laura Jamieson.
In 1995 I opened a shop featuring my own label in the Fulham Road selling ball gowns, Ascot wear and wedding dresses to the local establishment. Then after 7 years I moved to a bigger shop in the Fulham road and opened The Chelsea Collections which promoted new designers, sold in 2001. I then concentrated on painting, writing and consultancy work, and have just launched  The Sweet Shop Online ". (Laura Jamieson, 2012) 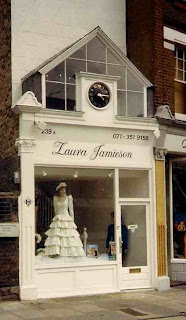 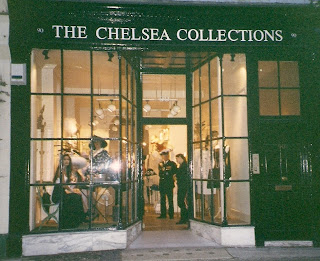 Ms Jamieson had also started facebook page devoted to King's Road in the 1960's where you can find a lot of interesting information and photos from 1960's London. I recommend it to all of you who, unlike myself, are facebook users.
Posted by Peter at 02:08

Thanks for sharing this - it;s great to hear all these little stories from the very people who made 60s London!

This one is new to me! I'm so thrilled to be able to add another cult gem like "The Sweet Shop" to my favourite labels.