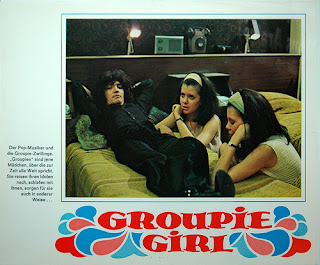 I was pleasantly surprised, when I recently watched this British drama from 1970. Usually described as 'trashy' or 'exploitation film' , it actually does not fall under neither category, and is much better than posters advertising it suggest. It is a film about...you guessed it, a groupie. Do not expect however, fun or glamour of Almost Famous. It is in fact, a bleak and pretty depressing movie that was definitely taking a critical view of the whole groupie phenomenon.

The film follows the misadventures of Sally (Esme Johns), who, bored with her life in a provincial town, decides to run away from home and sneaks into the van of a rock band that just played her local dancehall. Lads agree to take her with them - why wouldn't they? From that point  on, she is used, abused, subjected to various tasteless pranks and generally treated worse than dirt - and that's putting it mildly. She gets passed on from one band to another, until the inevitable tragedy occurs. 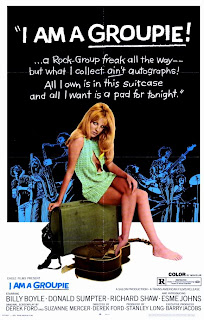 In America,  the film was released as I Am a Groupie. I don't know who that girl on the poster is, but it's definitely not Esme Johns.

The script was written by Suzanne Mercer, who wasa former groupie herself. Make no mistake, this IS a B-Movie. The acting could be a bit better and the script tries too hard to portray musicians as almost inhumane monsters (although, having hung out with struggling musicians for the large part of my life, I can vouch that they are not generally the nicest of people). But it shows the reality that is all-too-well known to anybody who has ever been in a touring band - dodgy managers, grotty B&B's , traveling in vans with no heating, ego wars and petty fights. At this point I must mention that arguments between band members portrayed in the film, for some reason reminded me of the infamous Troggs Tapes (In 1972, shortly before they split up, The Troggs had a fierce argument in a studio, not realizing that the tape was left running. The tape circulated for years in the underground achieving a cult status and apparently served as an inspiration for This Is Spinal Tap)
.


Another downside to the film is godawful soundtrack. For some bizarre reason, all the bands in the film, seemed to have had a Badfinger obsession. Well, I guess Badfinger were quite big in 1970... 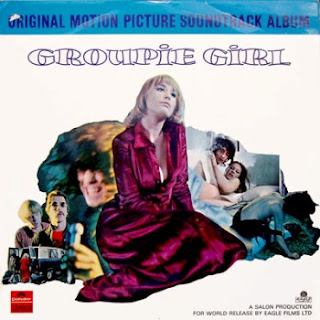 The original soundtrack. If you ever see it, don't buy it.

Costumes in the film are quite interesting. 1970 was a moment in fashion history when two decades stylistically clashed, therefore we get examples of sixties fashions - frilly shirts for men, mini skirts and go-go boots for girls, and premonition of what was about to come in the seventies - Flares, big fur coats and platforms (for both sexes). It is worth to point out that none of the groupies in the film dresses in a style which today is referred to as 'boho chic' and often associated with 60's/70's groupies. Clothes worn by everybody during a party scene are quite amazing - most of them look quite cheaply made, but it gives you a chance to see what 'real people' wore in 1970. 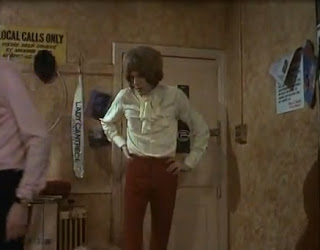 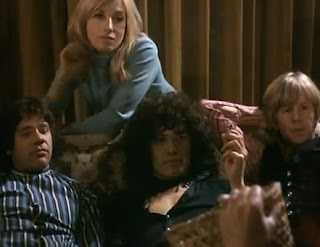 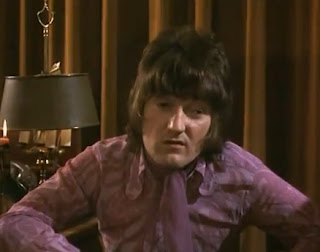 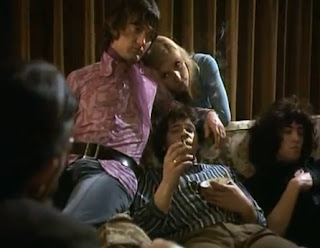 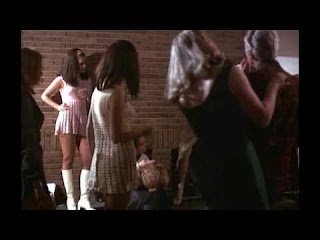 Overall, I would say that the film is definitely worth watching. It gives you a chance to take a look at the English groupie scene of late 60's/early 70's with certain amount of cold realism, and without heart-warming nostalgia.

And you don't even have to buy it. Some kind soul has uploaded the whole film on YouTube.

Hi.I was bob tn the groupie girl movie.The picture you posted is not opal butterfly it is English Rose featuring me and ex love affair keyboardist Lynton guest.Check us out we have both had long and varied carrears in the buisness.Lynton also became a famous foot5ball reporter and pundit whpo has written many best sellers.He also has a book about the life and trial of michael Jackson.I am Jimmy Edwards one of the first and youngest mod's and musicians who has worked with everyone from the neat Change to the Jam.If you really want to know about that culture you should know me and my contribution to british rock.It's amusing you saying you don't like the music.The general consensus with reviewers over the last 40 od years is that it's the best thing about the movie.It's true that when people watch groupie girl they see the serious side and the point it was making.Way beyond it's time and ground breaking.You are entitled to your view.Please do your research and find out who was who.'m Jimmy Edwards,If you don't know of me you should.Best wishes Jimmy

You make an extremely good point about how the costuming in Groupie Girl looks "cheaply made" but shows how people really did dress in the late Sixties and early Seventies. I was born in 1968 and am a film director in Hollywood, and my current production is a television series set in the Hollywood of 1971. One thing I am quite strict about is getting the costuming right. So many productions and modern wardrobe personnel miss what you mention. When they dress the cast, the clothing looks too ornate, too colorful, too new and too shiny: too well-made. You can tell it all came from Western Costume out here in the valley, and it drives me crazy.

Recent case in point take the Scorsese produced feature Free Fire. Look at the costuming at the link. I was alive in the Seventies just as he was. This never would have gotten past me had it been submitted by wardrobe. How did this costuming get past him?

Scorsese does a bit better here in his own production, Vinyl. The colors are more down to earth and a more realistic depiction of how "grown-ups" dressed when I was a child in the middle and early Seventies. But everything still looks straight off the rack at Western.

He and his wardrobe people seem to forget people actually worked and lived in these clothes. Now contrast what you just saw to my own production, Movieopolis.

Like I said I'm the show's director but I also supervise all wardrobe and music on the series. It's my way of making sure it's gotten right. Many young wardrobe personnel working today in LA were born during the 1980's; they think they know what 1965 to 1975 looked like because they've seen glimpses on YouTube, in books or in Google Images. But looking at a thing is not the same as having been there and lived it. The texture of the era you grew up in has a way of seeping into you the way coffee can a filter: I find that my wardrobe work on Movieopolis has made me sought-after now by other shows. The reason, when I ask? "Because your Sixties and Seventies clothing looks REAL."

People lived in these clothes the way your readers, sitting at home visiting Dandy In Aspic on their computers, are living in THEIRS. A lot of Hollywood wardrobe people seem to miss this. I never have and never will. Thank you for noticing how true-to-life the costumes were in Groupie Girl. The grittiness, imperfection and realism of this film is one of many reasons I like it.

The characters are dressed the way my parents, their friends, co-workers and people they encountered on the street did. Groupie Girl looks the way I remember 1970 LOOKING. :)

Has the 1974 longer cut of the film ever been on DVD? It was either called Les affamées du mâle, or Les Demi-sels de la perversion.
I did find a site that professed to show it, but it pushed you to a payment thing which my virus protection found dubious, and the small print suggested the site may or may not actually have the film anyway!
I've done quite a lot of searching so far, hence asking here on the offchance.
NB re the band in the film, it's wikipedia that would appear to have the wrong information on this, as I was just reading that before coming to this blog.