Recently, I picked up in charity shop something called Brooke Bond Picture Cards of British Costume. It is sort of a mini album for collecting cards that came with Brooke Bond tea bags ( "In the interest of education", apparently). The album was fully completed with 50 cards, each one depicting a different era of British costume. Card number one shows clothes from 1050. The last one, number 50, shows 'Day Clothes' from 1967 (I assume that is the year album was printed and completed) and it caught my attention for obvious reasons.

Man in the picture is wearing what looks like Dandie Fashions jacket, although illustrator made it slightly too long - it should end around the area where girl's left palm is. This mistake led to another - that is, describing the jacket as mid-Victorian tail coat with military trimmings (where are they?) 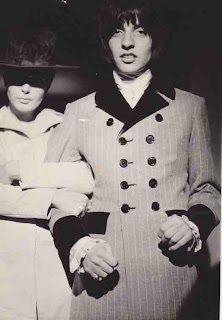 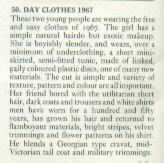 The drawing of a girl is clearly 'inspired' by famous photo of Donyale Luna - one of the first prominent black models - from 1966 modelling a dress by Paco Rabanne. 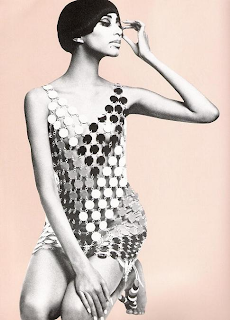 The description of a girl seems pretty sloppy as well. Natural hairdo? Exotic make-up?and also, these are not day clothes!  The descriptions were written by Madeleine Ginsburg, B.A., A.M.A. of Victoria and Albert Museum, who clearly was not a fan of contemporary fashion. Picture number 49 depicts Christian Dior's New Look from 1947, which means that everything that happened in British fashion between 1947 - 1967 was not worth attention according to Ms. Ginsburg (although 1920's get three different pictures). Another suspicious thing is the fact that C.W. Cunnington's books figure prominently in the bibliography. At the time, he was an influential fashion historian but a lot of his research had long since been discredited as sexist and misleading.
Although this little picture album cannot be treated seriously, it does remind me of lot of 'serious' books I went through, while doing a research at University, with drawings that focus on general impression, rather than details. My advice to anybody who does a research in the field of fashion and dress history is to stay clear of those kind of books altogether. You'll know them when you see them. Use the primary sources instead. 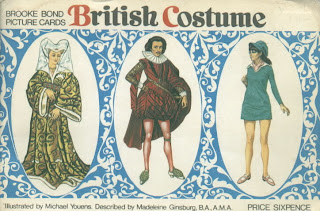 The bias of a lot of those books is really obvious. I remember a fashion illustration one describing 40s winter fashion as 'hideous', next to a print which is now available for home decor. I remember comparing that with other (set dressing, acting) textbooks and wondering how on earth this could be in a university library as it didn't even have a thin veil of impartiality, and if the writer didn't like it, he didn't explain it- frustratingly!