This Way To The Speakeasy 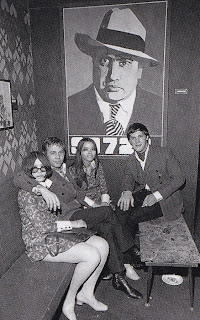 Recently, I found this NME article from May 1967 about Swinging London club Speakeasy.  It was a regular hangout for the musicians of the era. The club, located at 48 Margaret Street, opened in the late 1966, and soon became what Tony Bacon describes in his book London Live as Handy new watering hole, a prime early hours jamming post, and altogether useful hanging-out kind of place (p 101). The decor of the club was inspired by prohibition-era American speakeasies - it even had a fake 'front' - an undertaker's parlour. Another prominent feature of the venue was a portrait of Al Capone painted by Barry Fantoni. 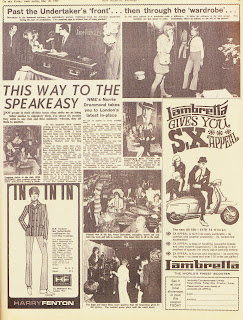 Managers Roy Flynn said in the NME interview:We want The Speakeasy to be a club which people really like to go to rather than the one which people go to, because it's the done thing. Soon, however Speakeasy would become absolutely out of bounds for ordinary people. As Tony Bacon writes:  It became legendary as the club to which entrance was easy only for those with at least one hit record that week. 'Hard to get into? No , nearly impossible if you're not a member' wrote Penny Valentine in Disc, "and even harder because it's so full. Therefore try to latch on to a happy-hippie scene goer who belongs" (p 103).
Apart from being a rock stars' hangout, The Speakeasy was also, an uber-exclusive gig venue. In the article, The Soft Machine are described as 'resident group' and are pictured jamming with Jimi Hendrix. A stream of good bands performed at the Speak - wrote Tony Bacon - Hendrix's Experience was among the first in January 1967. Marianne Faithfull said that when she went there to see the great guitarist with Mick Jagger, Mr. Jimi tried to seduce her, whispering: 'What are you doing with this jerk, anyway?'. Cream appeared in August, just before jetting off for their first US tour with compere Frank Zappa introducing them as 'dandy little combo' (...) 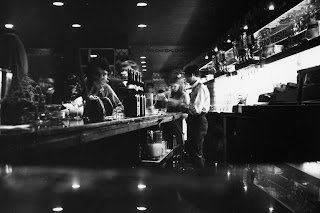 Interior of the Speakeasy

The Speakeasy was also the key place to go if you fancied a jam.'There was a lot of blowing at the Speak', Charlie Whitney of Family agrees.'People like Ritchie Blackmore would just get up. Hendrix was always blowing there. Couldn't get him off! He didn't care what he played, either: guitar, bass, anything he'd be there. And with anybody. It was definitely the after-hours musician's place. Chris Welch from Melody Maker had another theory for the Speakeasy's popularity.'(It was) because of the tireless patience of the head waiter and the staff, who didn't seem to mind too much when Mr. Moon appeared naked letting off fire extinguishers, or Ginger Baker hurled the odd dinner at some rival who displeased him'. For some, however, it was all a bit too much. Soft Machine's Robert Wyatt, for example:'Rock groups meeting in expensive clubs that are difficult to get into? What's all that crap? (p 104). 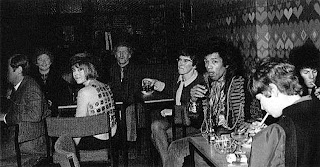 Hendrix and entourage at the Speakeasy, 1967

Speakeasy aside, on the same page of NME as the Speakeasy article, there are two ads - one for cool clothing outlet Harry Fenton, and one for Lambretta. 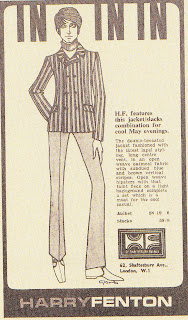 Although it's hard to find any information about Harry Fenton, the ad is certainly impressive - it pictures a hip young man in double-breasted jacket - a dedicated follower of fashion, whom you'd expect to see on the streets of London in 1967.

The Lambretta ad looks, by comparison, pretty dated. Yes, the font at the top hints at 'flower-power', but the drawing of  a mod and his female companions belongs more to 1965 rather than 1967 (apparently, in 1967 scooter sales in Britain had fallen dramatically, forcing Vespa and Lambretta to do aggressive ad campaigns. Vespa even tried to launch a trend for 'flower-power scooters' with psychedelic patters. Luckily, it didn't catch on).

Gosh! a flower power scooter? They really were getting worried. I think there would have been enough cars painted like a Technicolor dream coat to cover that need.
Great article find!

I quite like the sound of a flower power scooter actually!

That club sounds amazing. I'd never heard of it despite the kind of names that used to hang there. Great post!

Cool piece! I've got a mods book with a repro of an advert for "Hippie" Eddie Grimstead's scooter dealer offering toi trick out your new scooter ala Lrnnon's Roller. "Uncut" did an issue a few years back with repros of "NME" and "Melody Maker" articles from '63-'69 and there were some great bits on the Bag of Nails and the Speak (with a great pic of Eric Burdon looking like he wanted to die being photographed with Peter Noone bending his ear).

Hello, Dandy! I came over from Lucy in the Sky because I noticed she named your blog for a Liebster Award. Congratulations! I love what you're doing here and I agree that 1966-67 was a very exciting time period in England and in America. I often point to 1966 as having been the greatest year of my life. My blog revolves around a "speakeasy" of sorts, the Shady Dell in York, PA, USA, a club for teenagers that never closed, was often jammed and was loosely supervised. I clicked to follow your excellent blog and I invite you to come over and take a look at mine which celebrates good times at the Dell and the best music and memories from the 50s thru the 90s. If you decide to join I will be thrilled to welcome you as a new friend. Thank you very much, Dandy!