I remember watching a documentary about Performance in which Anita Pallenberg said that there was a whole genre of so-called 'Swinging London films', in the late sixties and they were all dreadful!. It is true. A lot of films had been made that tried to repeat the success of Blow-Up, Alfie or Georgy Girl. The most memorable of those films would include Up The Junction (Hollywood - financed attempt at the kitchen-sink genre, lacking both, the edge and a depth of Tony Richardson or John Shlesinger), rather brilliant Here We Go Round The Mulberry Bush (1967) and Smashing Time (1967). 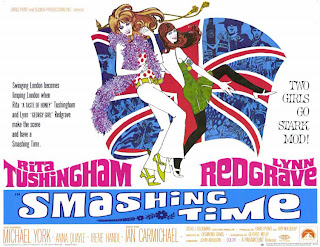 Smashing Time was described by many as "Carry On Swinging London", although such description is not entirely accurate. It flopped at the time of its cinematic release in 1967 , and to this day it has not been released on dvd in Britain (a region 1 dvd will set you back £35 on Amazon). Not so long ago, it emerged on YouTube in 12 parts, only to be taken down after few months.It is there where I finally saw this film , about which I have heard so much. I must admit, that it is not a great film - but there are some interesting things in it. Amazing costumes are certainly a reason to watch this film. A footage of Carnaby Street at its height is another.And a scene in which an outfit destroyed in a pie fight prompts a young 'peacock' to commit suicide is priceless. 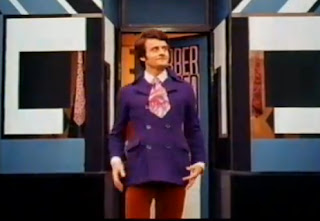 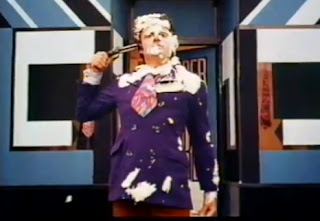 The film features Rita Tushingham and Lynn Redgrave at the height of their fame, but their great abilities as  comic actresses, so well presented in their earlier films, The Knack..And How To Get It (Tushingham), and Georgy Girl (Redgrave) is lost here between really tacky slapstick humor. The film was scripted by George Melly - jazz musician, raconteur, Swinging London scenester, and above all, an author of Revolt Into Style - a great analysis of Sixties London scene.  His script was an attempt to document and satirize 'Swinging London' at the same time. Perhaps this too obvious attempt to document an era is a main fault - the film captures the spirit of the time and it hits a viewer over the head with it, to the point where its neither funny nor interesting. The film follows a story of two hapless Northern 'lasses' who come to London , having read all the stories about swinging scene. They quickly get lost in a world of dodgy bedsits and even dodgier strip clubs. Lynn Redgrave's character eventually makes it big as a pop singer and dates a David Bailey-esque photographer (Michael York, in his first ever role), but she realizes that fame and fortune are not what she thought they would be. Hardly an original story, but the film has certain kind of charm.

Readers of this blog should find one scene interesting. At one point in the film, Rita Tushingham's character finds a job in a uber-hip boutique called Too Much. 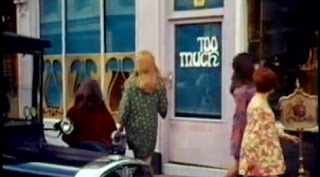 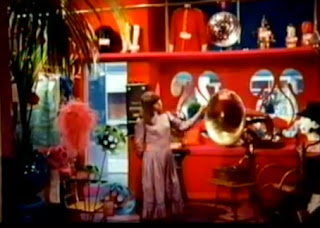 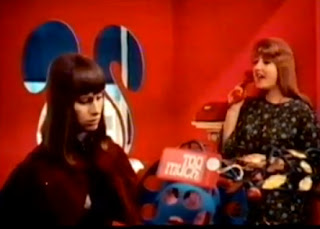 This fictional place is obviously inspired by places such as Granny Takes a Trip or Hung On You. In one scene, the owner of Too Much visits a run down second hand clothing shop in search for an inspiration (which is what Sheila Cohen and John Pearse from Granny Takes a Trip were doing). In other, she disappears, leaving poor Rita Tushingham (whom she hired only five minutes earlier)  in charge of the shop. She gets irritated when posh and trendy friends of the owner come to the shop to hang out, without intention of buying anything (which was a common practice in Granny Takes a Trip). This brilliant scene, luckily is still on You Tube:

Note a brilliant cameo from Murray Melvin (reunited with Rita Tushingham after A Taste Of Honey). Rita Tushingham's scream about the sort of people who want something for nothing is poignant, and shows a class division in Sixties London, which George Melly later pointed out in Revolt Into Style.

It was already mentioned that the film was neither a commercial nor critical  success. Lynn Redgrave said: "We thought as we were making it, this will be just right. But the minute it came out people said, 'It's over. Swinging London is over' " (Shawn Levy, Ready! Steady! Go! The Smashing Rise and Giddy Fall of Swinging London, Doubleday edition, p 300).
It is possible that making of the film was quite chaotic. One of my tutors at University told me that he once interviewed Rita Tushingham on the subject of costumes in Smashing Time. Apparently she could not remember any details whatsoever about the production , apart from the general feeling of chaos.

Smashing Time might not be the greatest film about 1960's London, but it can be described as 'Interesting Failure' .Hopefully BFI will release it on dvd at some point, or maybe the film will reappear on YouTube again. Here's the original trailer to give you a little taste of Smashing Time.

Thank you for the interesting review, this definitely sounds like a movie I would be interested in watching at some point!

An excellent article; I'd like to see the rest of the film. In a similar vein, albeit more of a romantic comedy, have you seen There's a Girl in My Soup?

Thanks, Bon!
Yes, I have seen "There's A Girl in my Soup". It was ok, I quite enjoyed it, although I remember that the soundtrack was really annoying. Goldie Hawn looked great. Also, Mr. Fish designed entire Peter Sellers's wardrobe for that film.

Anna Quayle, who played Charlotte, lives, or certainly lived, in Brighton. I've seen her round and about, mostly in the North Laine. She might have more interesting memories of the film, and the sixties in general, than Rita Tushingham.

Great review. I managed to 'acquire' this film last night and watched it today. As a film, it's a mess but it does capture the era on film, the carnaby street footage being a highlight for me.

For me, the ultimate 60's movie is 'Blow-Up' it still amazes me. I also like parts of 'Wonderwall' although the score is annoying.

I want one of these from the Too Much boutique...http://s797.photobucket.com/user/cheap_and_nasty/media/Rita-Tushingham-Smashing-Time-Too-Much-1046x754-1.jpg.html

What were they called, officially?

Actually Rita scores the photographer, who has had it with "dolly birds" like Lynn aspires to be.

He realizes Rita has the later sixties look epitomized by Barbara Parkins in "Valley of the Dolls".