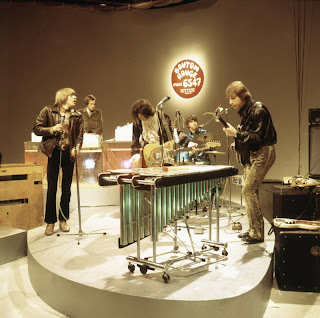 Bouton Rouge was a French live-music TV show which ran between 1967 and 1968. During its short existence, it captured some of the best British Mod/Psych bands at their peak. A lot of Bouton Rouge footage had emerged on YouTube recently, and I must say it is a feast for both, eyes and ears. We can see performances by Jimmy Page-era Yardbirds, The Blossom Toes, The Small Faces with P.P. Arnold, The Moody Blues and many more. Here I enclose some of the more interesting ones... 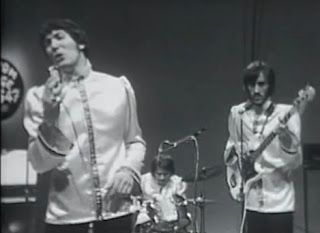 Timebox were a soul/psych band from Southport, Lancashire.Here they are performing their version of 'Beggin' (originally by The Four Seasons), 'Hold No Grudge' and 'Come On Up'. I love what they are wearing. It is a design  inspired by 19th Century Russian peasant shirt. It might be from Mr. Fish or John Stephen, although it is hard to say, as by 1968, Carnaby Street was full of stuff like that.

Intresting piece of trivia about Timebox: Ollie Halsall, who plays vibraphone, and drummer John Halsey 'went on to bigger things' as members of The Rutles - Eric Idle's brilliant spoof of The Beatles, and second most famous (after Spinal Tap) joke band ever. Halsey played the drums on all Rutles songs and he appeared in All You Need Is Cash (1978) as drummer Barry Wom, based on Ringo. Halsall,sang all the McCartney-esque  songs, but since Eric Idle played the part of Dirk McQuickly (McCartney) in the film, Halsall only made very brief appearance as original  bassist Leppo (based on Stuart Sutcliffe).

This one must be my favorite: Psych-era The Yardbirds with Jimmy Page on guitar. Here they are doing three songs: classic 'Train Kept-A-Rollin', even more classic 'Dazed and Confused' and their pop-psych hit 'Goodnight Sweet Josephine'. The most interesting is 'Dazed and Confused' which Page will perfect with Led Zeppelin. Of course, Led Zep's version was better, which doesn't mean that this one is bad. Keith Relf delivery is not as powerful as Robert Plant's, but arguably, his lyrics are more interesting.. .In  any case, this footage is twelve minutes of pure perfection.

Another interesting one is  a performance of Grapefruit. 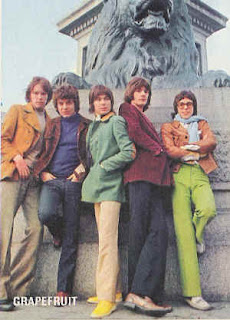 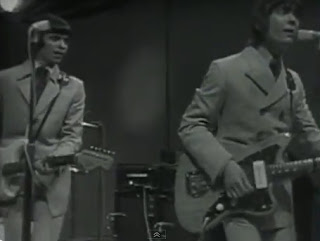 Grapefruit were signed to Beatles' label Apple, but unlike their label-mates (and fellow Beatles soundalikes) Badfinger, they never really got much recognition. Here they are doing two numbers: 'Yes'  - a piece of Merseybeat pop which must have sounded strangely anachronistic in 1968, and 'Dear Delilah', again heavily inspired by Beatles, but this time from Sgt. Pepper era.

This is rare: Pink Floyd performing Syd's songs without Syd. This was recorded on 22.02.1968 - literally within days of Syd's departure from Pink Floyd. Dave Gilmour takes over vocals on 'Astronomy Domine' and 'Flaming'. It still sounds great, but the band are visibly uncomfortable. Roger Waters' dark psychedelic gem 'Set The Controls For the Heart Of The Sun' sounds amazing, and 'Let there Be Light' is an indication of Pink Floyd's new , post-Syd direction (unfortunately, for some reason it won't let me put it up here). Brilliant footage.

London Psychedelic scene heroes Blossom Toes are performing 'Listen To The Silence', 'Mister Watchmaker' and 'The Remarkable Saga Of Frozen Dog' (recorded on 23.03.1968). 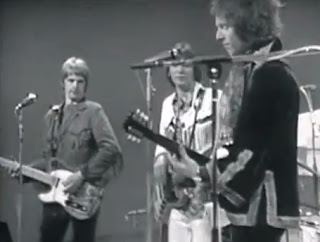 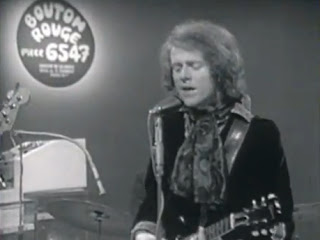 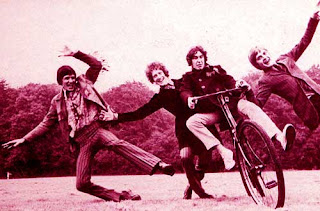 I'll end with with this magnificent performance of Small Faces' 'Itchycoo Park' and 'If You Think You're Groovy' with P.P.Arnold.

There is more: Ten Years After, Moody Blues, Procol Harum  and few other. All of them worth checking out.
Posted by Peter at 04:22