By 1966 the phenomenon of 'Swinging London' had reached its peak. The momentum that started from The Beatles, Rolling Stones, Mod Subculture, the emergence of new designers such as Mary Quant or John Stephen had put London on the map as a new capital of music, fashion and design. This phenomenon was brought to the attention of the rest of the world by American journalist Piri Halasz, who, in her cover story for Time magazine titled 'London: The City that Swings' (April 15th, 1966) described the changes that had taken place in the capital of Britain. As a result, the places described in the article, such as Carnaby Street, became swamped with tourists from all over the world trying to have their share of 'swinigng action'. 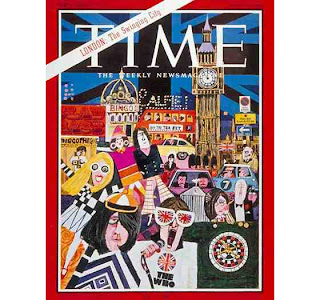 The guide books for tourists were being published, such as Karl Dallas' 'Swinging London - A guide to where the action is'. In the introduction to this book, Barry Fantoni seems bewildered with he new phenomenon and criticizes "Fleet Street hacks who when hung up for two thousand words take a taxi into Carnaby Street or Kin's Road and write a fab load of switched-on rubbish that gets subbed down to a caption for a photo of some swinging dolly with her skirt up over her knickers".  He claimed , rightly, that "London has been swinging for ages, it's just that Time magazine and supplements hadn't noticed it". (Max Decharne, King's Road, p 207) 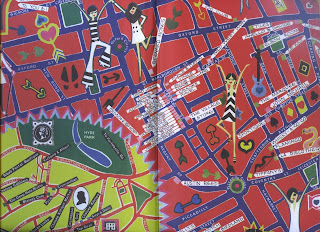 A Map of Swinging London's boutiques and clubs in Rave magazine, April 1966﻿ 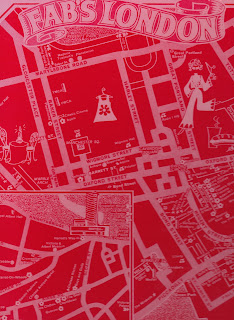 A map of Swinging London's boutiques and clubs in 16 magazine, 1967 Both, Barry Fantoni and Piri Halasz cashed up on the new phenomenon and wrote guides to Swinging London.

Carnaby Street was the biggest victim of the phenomenon it helped to create. From 1966 onwards it was associated less with the emergence of new trends for fashionable young people, and more with kitsch for tourists. As George Melly writes in Revolt Into Style:﻿ "Soon there were as many girls as boys, as many adolescents as adults and more tourists than anyone. The 'In' group wouldn't have been seen dead in Carnaby Street by 1966. Chelsea, after a period of decline, reasserted its role as the stage of fashion, and so it remained ever since ( George Melly, Revolt Into Style, p 154). Even John Stephen - a designer who was largely responsible for making Carnaby Street what it was, seemed to have agreed with this statement. Asked by Nik Cohn about post - 1966 Carnaby Street, he said: " Who are they? (...) They are nobody in particular. They're mister average" (Nik Cohn, Today there Are No Gentlemen, p 117). Barry Fantoni wrote that: "Carnaby Street customers are (to use unfashionable expression) working class. While they think nothing of spending the week's wages on a complete outfit, the class that shop on King's Road will spend that sort of money on shirt" (Decharne, p 207). Michael English's interpretation of Carnaby Street and its boutiques, 1970 The Peacock Revolution, which was sparked by such designers as Bill Green ( Vince) and John Stephen in the late 1950's had reached its crescendo with the arrival of Mr. Fish and King's Road boutiques. However, there was a significant difference not only between the clientele of Carnaby Street and King's Road﻿, but mainly between the designers and entrepreneurs themselves. Bill Green (of Vince), John Stephen and Michael Fish were all from poor backgrounds, and spent years climbing in a hierarchy of fashion industry. All three of the were also homosexual. Designers associated with King's Road boutiques - John Pearse, Nigel Weymouth (Granny Takes A Trip), Michael Rainey (Hung On You), Tara Browne (Dandie Fashions) were, by contrast, heterosexual and extremely upper class. This difference between class and sexuality is very poignant for the whole Peacock Revolution pehaps maybe even for the whole Swinging London phenomenon. It is worth to quote Nik Cohn on the issue of class that owned King's Road boutiques:
" Public school boys, arriving in London, were no longer faced by clear out alternatives - politics, The Army, The City. They were no longer born to govern, had no inbred function (...) Where once they would have been busy building empires, now they gambled and smoked hash, and immersed themselves in Pop. From time to time, they would acquire new toys, like a boutique or an antique shop or a photographer's studio, to give the illusion of purpose"(Cohn, p 92). 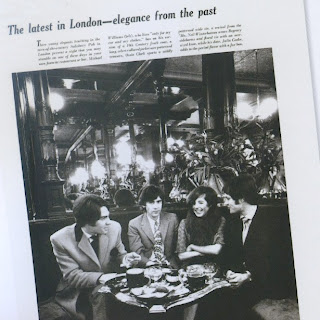 It seems like for the owners of the King's Road boutiques, their businesses were more of a leisure activity than a method of making a living. They did not do it for survival; therefore they could afford to take various risks  - experiments with adjusting clothes, mixing styles, selling flamboyant outfits to rock stars for high  prices. Relaxed, laid back in their attitude, they were not good at being businessmen, which explains why their boutiques were so short lived. They did , however create  one of the most interesting styles in British post-war male fashion. Peacock Style was a true modern expression of traditional dandyism. It was elegant, flamboyant, exclusive and memorable. 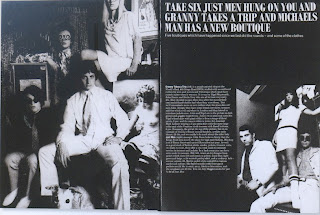 An article about Chelsea boutiques in Town magazine, August 1966.

Look At Life: A documentary about King's Road boutiques from 1967, narrated by Michael Ingram.

Somebody used the same footage, but speeded up,to make a video to one of my favorite songs: I'm Rowed Out by The Eyes. True lost Mod classic, and it works so well with the footage. Enjoy!

Source of the images: "Boutique London" by Richard Lester, "The Look - Adventures in Pop and Rock Fashion" by Paul Gorman and Away From The Numbers tumblr.
Posted by Peter at 20:56