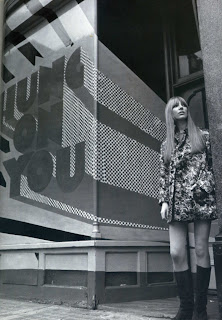 Hung On You (...) was simultaneously the last fling of dandyism and the first intimation of Hippie, of strangenesses to come - wrote Nik Cohn in 1971.
The boutique was owned by Michael Rainey - a young designer, enterpreneur and self described dandy. He was a son of notorious society figure Marion Wrottesley. Before he opened Hung on You in December 1965, he was already well known in London for his eye-catching, yet elegant style and his marriage to aristocrat Jane Ormsby - Gore - a daughter of Lord Harlech. She was a contributing editor of Vogue and she became Rainey's buisness partner when Hung on You opened on 22 Cale Street. 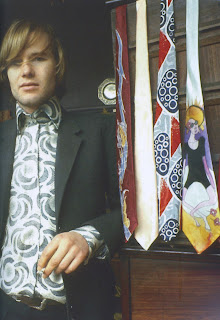 Unlike John Pearse, Mr.Fish, or John Stephen, Michael  Rainey did not have a previous experience in fashion industry.He drew his inspiration from his stylish friends, such as his wife's brother Julian Ormsby - Gore, aristocrat Neil Winterbotham or antique dealer Christopher Gibbs. 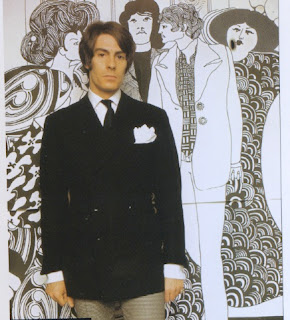 Neil Winterbotham in Hung on You, 1966

Hung on You's sources of inspiration for designs and tailoring policy were similar to those of Granny Takes a Trip. There was a fascination with Art Nouveau visible in artwork by Tony Little on the walls of the shop. 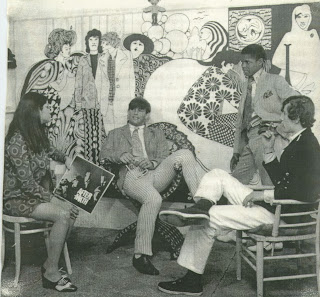 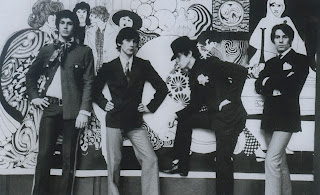 Photoshoot for a cover of Life magazine inside Hung On You. The second left is Ossie Clark and first right is Neil Winterbotham. 11.07.1967. Jess Down modelling jacket from Hung On You for Men In Vogue, 1966 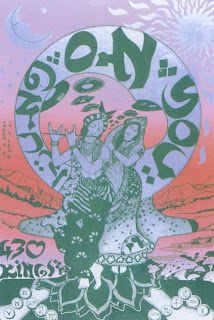 Michael English had designed psychedelic posters advertising Hung on You.

There was also an oriental influence - Jane Ormsby-Gore was making regular trips to India in search of fabrics. Michael Rainey, just like John Pearse, was reworking vintage clothing trying to adapt it to the trends of the 1960's. He was making Liberty print jackets and mandarin collar shirts complete with frills. This was a peacock style at its finest - a psychedelic and dandified look, with references to past and to present, to East and to West. One of the customers of Hung on You described their clothes as "Edible looking - ice cream coloured (...) white, pink, pistachio-green and cream" (Paul Gorman, The Look, p. 83). 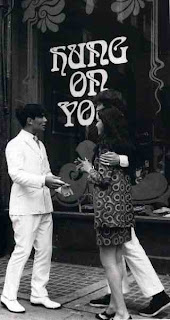 Typical white suit from Hung on You, 1966 Models Sara Crichton-Stuart and Twiggy outside Hung On You, 1966 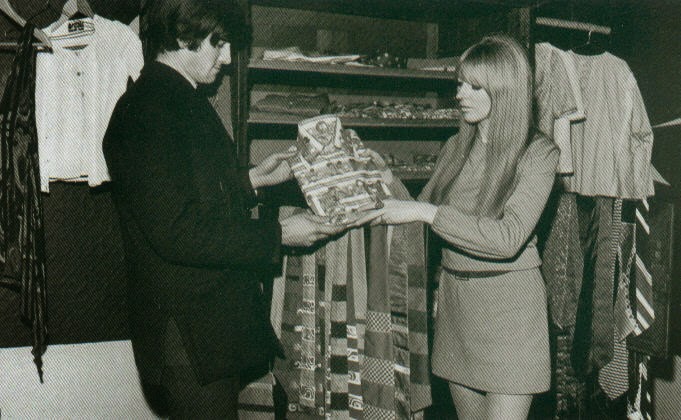 These clothes were often made by well-established East-End tailors who were working with fabrics supplied by Rainey. In his interview for Town magazine, Rainey said: "We are not tailors, but we will make things up for people if we think their ideas are good" (Gorman, p.83). The clothes were expensive - jackets were priced at around 35 guineas, and shirts between 6 and 7 guineas, but as one of the customers, Richard Neville recalls, "Groovers didn't mind paying triple for a floral chiffon shirt, because Mick Jagger had probably bought one like it the day before" (Gorman, p 83). The fact that Hung on You was embraced by pop stars, especially Beatles, Stones and The Who was very helpful for the business and in 1966 the shop moved to the new location - 430 King's Road. 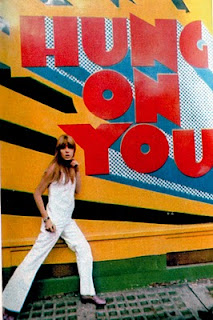 However, the success of Hung on You was short-lived - it closed down in September 1968. It was a part of the same pattern that caused the downfall of Granny Takes a Trip - expensive fabrics, cost of tailoring and inability of combining laid-back mentality with business. During its short existence, however, Hung on You was an influential place in an exclusive circle of London's young, rich and famous. Nik Cohn wrote: When you shopped at Hung On You, you felt like both Oscar Wilde and Captain Marvel, locked up inside one body(...) From past and present, and future, influence and cross-influence, Rainey wound up with something all his own, a personal montage. In my view, he was the most original designer that English menswear has produced (Nik Cohn, Today There Are No Gentlemen, p 120).

"Michael made the most gigantic mistake of leaving Cale Street and going onto the King's Road. He felt that it was happening on the King's Road, but it cost a lot of money to move, and people didn't know where we were. It became less successful then. Before it was slightly more slick, with a big jardinière mirrored thing in the middle of the shop. We had got two children by then, and we were seriously into soul seeking and going on fasts and meditating… We left London, sold everything, gave away everything, and went to live in Gozo. London times and everything were over." From an interesting interview with Jane Ormsby Gore (http://www.vam.ac.uk/content/articles/i/jane-ormsby-gore/)