The New Psychedelics - a Revival That Never Was?

It is generally known that 1979 was a year of Mod revival. However, it turns out that apparently it was not the only subculture from the sixties that was revived that year. Ted Polhemus, in his highly influential book Street Style (chapter titled Swinging London and Psychedelics),claims that Psychedelic/Peacock style coincided with Mod revival in late seventies and early eighties. Sadly, the only proof of the existence of that revival in Polhemus's book is this photo: 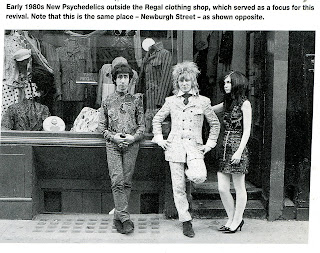 The caption under the photo reads: "New Psychedelics outside the Regal clothing shop, which was located on Newburgh Street one block over from Carnaby Street and served as a focus for this revival".


Further traces of the revival can be found in Amy De La Haye's book Surfers, Soulies, Skinheads and Skaters: A Subcultural style from Forties to the Nineties. This book immortalized first ever fashion exhibition in V&A entirely devoted to the subcultural style - Street Style from 1994. In the book, we find a section devoted to 'Psychedelic Revival UK 1979'. 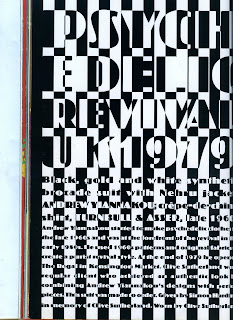 The text reads: "Worn by Clive Sutherland, who was a regular client of Andrew Yiannakou's shop in Kensington Market. He created an authentic Psychedelic Revival look by combining Yiannakou's pieces with period pieces, such as the 1960s Turnbull & Asser crepe de chine shirt illustrated . This suit was made to order.


Yiannakou started to make psychedelic clothes from the late 1960s and was at the forefront of the late 70s/early 80s revival. He used original 60s patterns and fabrics to create a purist revival style. At the end of 1979 he opened the Regal in Kensington Market."
Here's the picture of the suit, which is still in V&A collection: 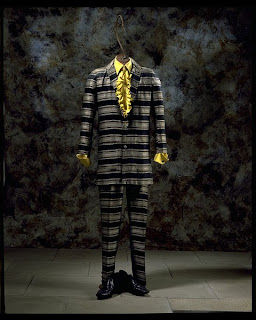 Unfortunately, those brief mentions in Polhemus' and De La Haye's books are the only traces of 1980's psychedelic revival. I would love to find out more about the Regal. If anybody has any photographs or original clothes from that boutique, please do share it!

EDITED TO NOTE: I HAVE BEEN CONTACTED BY QUITE A FEW PEOPLE WHO 'WERE THERE' DURING 1980-1981 PSYCH REVIVAL AND SHARED SOME GREAT MATERIAL WITH ME. READ ALL ABOUT IT HERE.

Worth looking into 'Planet Alice' as well, which was a Portobello psych/sixties inspired shop co-created by Lee Starkey (daughter of Ringo) in the late Eighties.

I'll have to dig up some pics for you of a short lived early 80's night spot called The Groovy Cellar which was the pinnacle of the so called early 80's "psychedelic revival" with bands like The Mood Six, Dr. & The Medics, The Direct Hits et al. The bands were sorta lame but the clothes were great!

Thanks Wilthomer,Please do, That would be really great, I'd be most interested.

I quite like some of the early 80's American psych/garage revival bands like The Fuzztones or Chesterfield Kings..I don't really know much about British ones, though...I have some great fanzines from that period such as Freakbeat Magazine and Strange Things Are Happening, and i am planning to put them up in here at some point. Shame they don't really have many usable photographs of clothes.

This link will take you to a film of the Groovy Cellar club in 1981. The little guy with red hair dancing is Clive Sutherland, who owned the suit in the V&A museum. He sadly died some years ago. The Regal opened in Kensington Market, back end of 1980, then they opened a new shop at 9 Newburgh Street in 81. It was the brainchild of Graham Pettit and Andrew Yiannakou, and it was absolutly brilliant while it lasted.

I was trying to work out the number of that shop a couple of years ago when I was in London. Trying to work it out from where the road connecting Newburgh to Carnaby St fell but struggling with a 2 decade plus interval memory from the time I used to frequent there.
I may still have a Regency jacket and a couple of shirts from there at my mother's place in London. I gave away most of what I had since I'm now a lot larger than I was at the time.
The photo of 2 guys outside the front of the shop shows Gary the singer and Marc the violinist of the band Le Mat who grew out of an earlier mod band. There was a jazz rag feature shot in the shop that also had Gary in as furniture as behind the nude model , think it was in Knave or something like that. Wonder if copies survive.
The Kensington Market shop had Chris Wilson of Flaming Groovies/ Barracudas fame working behind the counter when I used to go there plus a wide array of great psychedelic records on a shelf back there.
Mike Jones of the Playn Jayn used to frequent the Newburgh st shop quite a bit, & I was there one day when Steve Severin came in to buy a shirt, also remember seeing Leee from Imagination wearing clothing from there on Pop Quiz and Tight Fit on Top Of The Pops.
There was a women's clothing shop called Sweet Charity that was somewat linked. I think Andy Yiannakou and Sweet Charity's owner dated for a while.
I heard that Andy died some years ago, great shame he was a nice guy.

Hi Stevo The Regal was just opposite the corner of Lowndes Court ( home of Well Suspect, Risky Business, Street Theatre) at number 12 and then Golden Threads was at 13 after Graham and Andy split.