In my last post, I looked at the career of John Stephen - a true revolutionary of male fashion in the 1960's. Now, I would like to devote a little space to Bill Green and his boutique called Vince (1954 - 1969). Bill Green pre-dated John Stephen (who was also his one-time employee) few years, and the height of his career was in the late 1950's - however, his designs were an inspiration for many designers who would revolutionize male fashion in 1960's.

Bill Green started his career in the late 1940's from being a photographer specializing in taking photos of semi-naked wrestlers and musclemen. His models were wearing provocative bikini-style posing briefs, designed by Green himself, who, in the absence of  readily made garments decided to start his own line of briefs. He began to sell them through the mail order catalogue in 1950. His homoerotic designs appealed initially almost exclusively to gay customers. After holiday in France and Italy in 1952, Green, impressed by young Frenchmen who were sporting 'existentialist' look - black sweaters worn with lack jeans - started his own line of such clothes. He was the first one to introduce this look to British men. His mail order business flourished, and  in 1954 he opened Vince's Men Shop in Newburgh Street. This choice of location was not accidental -in 1950's, this part of Soho was an epicentre of gay underworld. Marshall Street Public Baths - a popular cruising area for gay men was just around the corner.However, the clientele of Vince quickly expanded beyond gay community. His unconventional designs appealed to young West End actors and Chelsea bohemians. Green was using fabrics which were unusual at the time - velvet, silk, bed-ticking for hipster trousers and pre-faded denims. is window displays were also quite shocking at the time - the mannequins dressed in briefs, or pink hipster trousers.

Typical magazine ad for Vince from 1962.

One of the shoppers at Vince's recalls his visit in the mid-1950's: "The only person (I) saw was tall, well-dressed young Negro who bought a pair of coloured denim hipster trousers. The Negro was obviously homosexual and I realized that homosexuals had been buying this stuff for years. they were the only people with the nerve to wear it" (Jeremy Reed, The King Of Carnaby Street, p 8). But the fact that, by late 1950's, it was not just homosexuals who had the nerve to wear it, proves that there was a shift in taste among young Londoners. The clientele of Vince included such names as actor Peter Sellers, jazz musician George Melly (who joked: "I went into Vince's to buy a new tie and they measured my inside leg" (Reed, p 9).) Pablo Picasso (who bought a pair of suede trousers), The King of Denmark, and young model-soon-to-turn-actor Sean Connery. Bill Green's designs did not influence street style or youth fashion directly as teenagers generally could not afford to shop there. However, the impact of Vince is difficult to underestimate. For the first time it was acceptable for heterosexual men to wear clothes previously only worn by homosexuals. It was also the first time when leisure were became chic - jeans and sweater could  be worn for an evening out from now on. This was a step towards informality, ambivalence and flamboyance - and it led grounds for a revolution in male fashion that happened in 1960's.  The young man largely responsible for this revolution worked briefly as a sales assistant at Vince's. Bill Green had sensed is ambition: "Not much good" - he said of his work as sales assistant - "Always dreaming of the bigger things" (Nik Cohn, Today There Are No Gentlemen, p 64). The young man himself also seemed dissatisfied: "I was just standing there taking money. Suddenly I thought, if this guy (Green) can do it, so can I..." (Reed, p 19). The young man was, of course, John Stephen. He had learnt a lot at Vince's and his own early designs and shop fronts owed a lot to Bill Green. However, the rise of John Stephen as a designer marked the downfall of Bill Green's. Stephen was much more in touch with the youth culture. Bill Green could not keep up with rapid changes in fashion which were happening from early 1960's onwards. By mid-1960's, his shop became un -chic. Financial problems forced him to move Vince's Men Shop from Newburgh Street to cheaper location in North London. In 1969, he closed his shop for good.  Bill Green might have been one of the initiators of the revolution in fashion, but he quickly fallen behind the times. In 1971, Green (by then a manager of a restaurant in Soho) said to Nik Cohn: "If I was to go into male fashion again today, I wouldn't even know where to start" (Cohn, p 51). 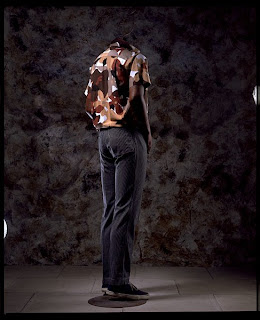 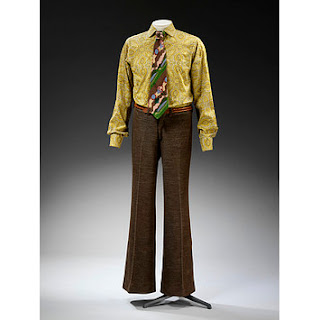 Outfits from Vince's Men Shop from mid-1960's in Victoria and Albert Museum.
Posted by Peter at 23:47

Thanks! I am currently writing an essay for uni touching on Bill Green but there is literally hardly anything about him on the internet :-O

I used to shop here and did so even when it moved to Thayer Street. At one point there was an outlet in the basement of Marshall and Snelgrove in Manchester, incredibly, that I used to try not to be seen drooling over when I was a teenager... There was so much around there, Malyard in Ganton Street, and, without any traceable history now, the hippy tailors behind the north end of Shaftesbury Avenue called the Major Arcana/