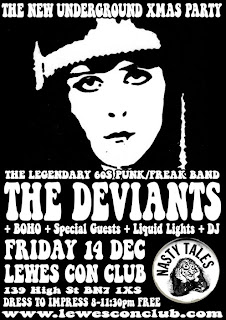 Mick Farren was a well-known character on the 1960's London psychedelic scene. Although mostly remembered as a leader of proto-punk band The Deviants (A.K.A The Social Deviants), he was also an editor of radical underground newspaper International Times, a writer for NME, a doorman at the UFO club in 1967, and author of several novels.
Last night The Deviants - band Mick Farren has been fronting for (on and off) 37 years, played a free gig at Lewes Con Club.

For those, who don't know, Lewes is a sleepy, yet very picturesque village in East Sussex, about twenty minutes by bus from Brighton. It is a kind of place where old, posh people come to retire (It's not all bad, though - psych hero Arthur Brown is a resident). Perhaps for that reason, Lewes has unusually high number of good vintage/antique shops, and charity shops are one of the best ones in Sussex. What Lewes also has is Con Club. Con is short for 'Constitutional', not 'Conservative' as I initially thought. It is an easy mistake to make, seeing as the bar area is decorated with dusty bookshelves and paintings of Winston Churchill. The perspective of seeing a psychedelic lightshow and the band fronted by one of the most radical hippies of 1960's in such a venue sounded interesting, to say the least...

Mick Farren formed The Social Deviants in London in 1967. They shortened their name to The Deviants shortly before releasing their debut album Ptooff!!.Their sound could be described as raw, scuzzy garage rock - an attempt to be an English version of MC5. Although a lot of critics at the time claimed Mick couldn't sing, he certainly had a stage presence. With his huge afro and tight velvet flares, he was a quintessential 1960's rock star, and the music of The Deviants was few years ahead of their time. 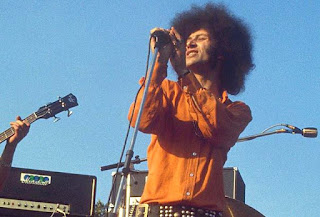 Mick Farren onstage with The Deviants in Hyde Park, summer 1969 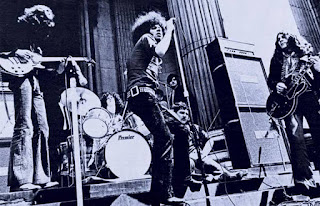 The Deviants playing guerilla gig at the stairs of St. Paul's Cathedral, May 1969 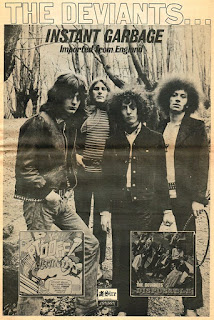 Mick Farren with The Deviants circa 1969

I am Coming Home - great song from Deviants' first album. Remember, this came out before The Stooges!

Although Ptooff!! - initially self-released - was picked up by Decca, it received very little attention. The original Deviants were going for two years playing gigs around London, some of them pretty high profile. 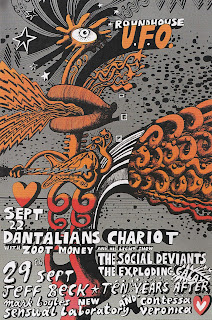 The Social Deviants at UFO Roundhouse, 1967 (poster by Martin Sharp) 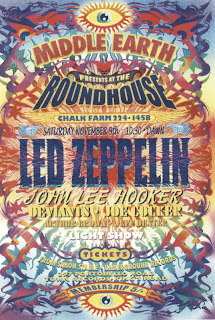 In 1969 The Deviants, along with Joe Cocker, Arthur Brown and John Lee Hooker supported Led Zeppelin in Roundhouse (poster by Alan Aldridge).

As well as fronting The Deviants, Mick Farren was also an editor of radical counterculture newspaper International Times. 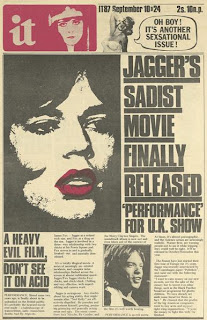 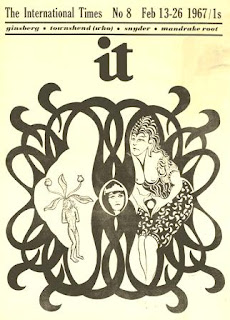 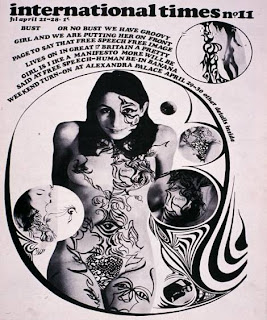 Some of the covers of International Times (via their online archive)

Very radical in his views, Mick Farren was regular protester and was frequently arrested. When in 1967 Jagger and Richards got sentenced for drug offences, Farren took it to the streets and staged the protest outside the offices of News Of The World - a tabloid responsible for a set-up of two Stones.  Farren got arrested and beaten up by the police. 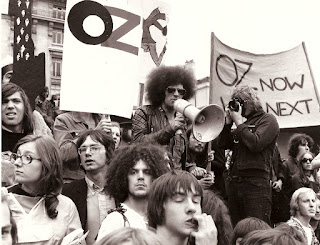 Mick Farren at the protest during OZ trial, 1971

He also participated in infamous incident David Frost's chat show in 1970, during which Frost got into heated argument with  Jerry Rubin after Mick Farren and others, who were speaking on behalf of the counterculture, invaded the stage.

When The Deviants split up in 1969 (the ex-members formed  Pink Fairies - a band which came to considerable success in the 1970's) Mick Farren recorded a solo album, before quitting music for a few years. During that time he concentrated on organising music festivals and writing for the NME. In one of his articles, titled The Titanic Sails At Dawn from 1975, he correctly predicted the dawn of punk music. In the early 1980's, he moved to New York.
Mick was also a very prolific writer who penned over thirty books - which included many science fiction novels, a history of rock poster (Get On Down, first published in 1976), a history of black leather jacket as a symbol of rebellion, and his most famous book - Give The Anarchist A Cigarette (first published in 2001) an autobiographical account of Farren's days on London scene in late 1960's/early 1970's. 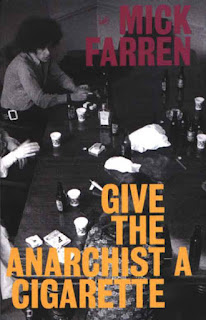 Give The Anarchist A Cigarette is probably one of the best and the funniest 1960's autobiographies I've ever read. It is a simple must-read for anyone interested in 1960's London. 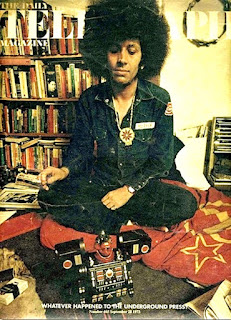 Mick on the cover of The Daily Telegraph Magazine issue dedicated to underground press, 1973

In the past three decades, he would occasionally reform The Deviants. In 2011, the original 1960's line-up played 'Spirit of 71' stage at Glastonbury festival. It was the same line-up that played Lewes Con Club on Friday.
It turned out to be a fun night. Although Mick Farren looked slightly unwell, the band still projected a lot of energy. Wife of the bassist spotted me and my girlfriend in the audience (which wasn't hard - anybody younger that forty at that gig stuck out like a sore thumb), complemented our look, and invited us backstage to meet Mick Farren. She wanted to show him that, as she put it, 'young people still dig his shit'. 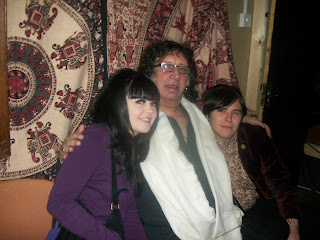 He seemed pleased with that as well. We had a brief chat about recent documentary about 1967 UFO scene titled Technicolour Dream in which Farren is one of the talking heads.


Edited to note: Sadly, Mick Farren passed away few months after. In July 2013, he collapsed onstage while playing a gig with The Deviants at Borderline in London, and died shortly after. We were certainly lucky to have met this amazing character in person, albeit very briefly. Read great tribute to Mick by his friend Charles Shaar Murray in The Guardian.
Posted by Peter at 01:43

Well done on getting to meet Mick, I've admired him from afar for a long time,I must have read his book 'Give the Anarchist a Cigarette' at least ten times,it's a smashing read and highly recommended if you haven't already done so yourself.