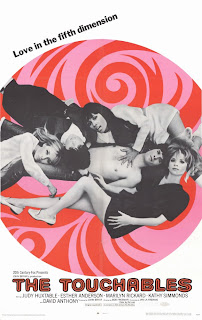 What is a title of 1968 film written by Donald Cammell, about isolated, decadent rock star surrounded by equally decadent women? Yep, It's Performance. But there's also another film which fits that description - The Touchables. Directed by Robert Freeman (photographer who shot album covers of With The Beatles, Beatles For Sale and Rubber Soul)  and released by 20th Century Fox, the film disapperared without a trace shortly after its cinematic release in 1968. It is safe to assume that it was not a box-office hit. To this day, it has never been released on VHS or DVD neither in Britain nor America. I have been trying, so far unsuccesfully, to track down a 'pirate' copy (judging from the amount of clips on YouTube, the film must be obtainable that way).

The Touchables is about four London Mod girls (Judy Huxtable, Kathy Simmonds, Esther Anderson, Marylin Rickard) who kidnap a rock star (David Anthony) and keep him as a sex-toy in a Buckminster Fuller-style geodesic dome. 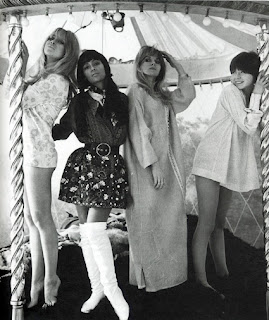 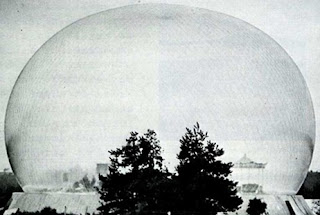 Donald Cammell reportedly based the character of a rock star on Brian Jones. For me, that's enough of a reason to watch this film. 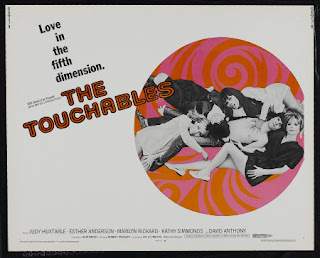 Even if storyline sounds a bit silly, 60's space-age-era set designs, great costumes and amazing-looking girls should make-up for it. After all, films like Barbarella or Danger:Diabolik earned a status of classics for purely the same reason. Also, the soundtrack was written by great British pop-psych band Nirvana (of 'Rainbow Chaser' fame.) 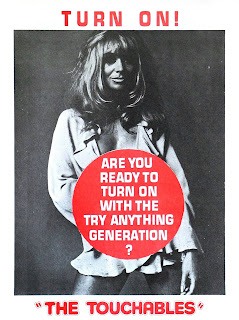 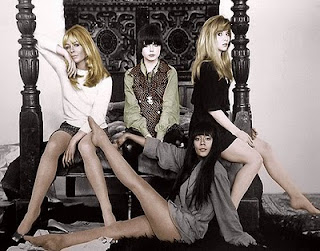 Clip of the first ten minutes of The Touchables. 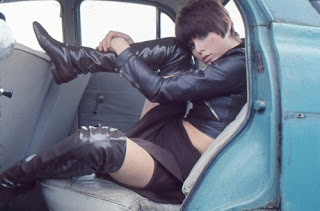 Anyway, If anybody have seen the whole film, please feel free to share your opinion...Oh, and any tips about how to get hold of a copy would be helpful too.

I've bought some things from them and they seem reliable, the films being of good quality.


Bit of trivia: Judy Huxtable, one of the Touchables, later married Peter Cook.

One of my absolute faves. I often picspam about it over on my blog.

They used to have it in their catalogue.

Very Kings Road. Very *gear*. Only surprised it didn't have a young Patti Boyd draped all over it.

You can also get it from modcinema.com

One of those films where I didn't have a clue what was going on but didn't matter in the slightest!

Thanks for the links and comments, I'll certainly keep trying to get hold of copy!

I think someone else has already said this but you can try modcinema.com :) Ilove your blog by the way, the way you write is so eloquent too! Definitely following you! :) x

I bought my copy from modcinema.com a few years back. It was very poor quality but worth the watch. It's definitely style over substance (which I often have no problem.) If you have no luck contact me and I can send mine over!

My take on the film: http://fastfilm1.blogspot.com/2011/01/touchables.html

I saw this film when it was released back in 1968 on a double bill with "Three in the Attic" starring Christopher Jones and Yvette Mimieux. What a trip! It still stands out in my mind as a classic depiction of a certain aspect of the late '60s.