Do You Take Acid With Your Tea? 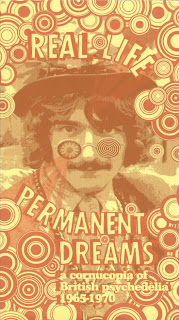 I must admit that as much as I love American psyche, my favorite part of sixties psychedelia came not from San Francisco or L.A. but from English Countryside. I was therefore very excited when I got for Christmas this box set - Real Life Permanent Dreams - A Cornucopia of British Psychedelia 1965-1970. It was first released in 2007, but since little information about it is available online, I thought I could do a little post about it.

As the connoisseurs of the genre know, British psychedelic bands differed significantly from their American counterparts. American bands, fueled by Anti-Vietnam protests  and teachings of Timothy Leary, were usually either radical hippies (like Jefferson Airplane, The Doors or Country Joe & The Fish), stoned blues-rock guitar virtuosos  (Grateful Dead, Mike Bloomfield) or just plain angry teens wanting to 'turn on, tune in and drop out' (The Seeds, The Standells, 13th Floor Elevators and  any other band that appears on Nuggets compilation). The approach of British bands was different. As sleeve notes (written by David Wells) of the box set explain: The homegrown pop scene spent 1967 wallowing in the dim and distant past (...) UK bands who employed the word 'revolution' were primarily seeking to establish the right to drop out while wearing cavalry red double-breasted Regency jackets and some really groovy crushed velvet trousers (...) As perfidious Albion dropped in, tuned up and turned out, the imaginations of the nation's leading pop acts were fired by the indigenous culture that had informed their childhoods on what was still, to use Thomas Dibdin's phrase, a snug little island. Following the releases of Sgt. Pepper, The Piper At The Gates Of Dawn and S.F. Sorrow,  British bands suddenly rejected American blues, Rn'B and three-minute pop songs as an influence , in favour of writings of Lewis Carroll, Edward Lear and Dylan Thomas. The social observations and character portraits of Charles Dickens, fantasy world of Tolkien, Arthurian legends, music hall songs of George Formby and absurd comedy of The Goon Show also played important role in shaping the sound and lyrical content of British Psychedelic acts. This sudden turn to the past was also expressed in fashion - the futuristic, space-age designs of Pierre Cardin, sharp suits and Pop-Art excesses of Mod popular in 1965 and 1966 were replaced  by a nostalgia after lost days of the Empire - Edwardian military jackets and Victoriana from such boutiques as I Was Lord Kitchener's Valet or Granny Takes A Trip.
Although the trendsetters, like Beatles, Stones or the Who, would leave psychedelia behind by mid-1968, the psychedelic scene developed a life of its own. Plenty of bands, mostly  from outside London, would continue, with various degrees of success, recording psych singles and albums till the end of the decade. Constantly experimenting and expanding their sound , the bands from late 60's British psychedelic scene formed grounds for most important genres of early 1970's - hard rock , glam rock and prog. And that's the story told through 99 songs on Real Life Permanent Dreams.

Clearly a lot of thought had been put into compiling a track list for the box set. There are plenty of compilations of 60's British psyche, and to avoid repetitions, auteurs of Real Life Permanent Dreams focus on long-lost obscurities rather that 'hits'. For that reason, a lot of important bands that defined the genre are not featured on this compilation. The list of deliberate omissions include such acts as The Move, The Pretty Things, The Blossom Toes, Kaleidoscope, July, The Attack, The Creation, The Herd, and few others. Even the box set's title song by Tomorrow is rejected in favour of lesser known, slightly faster version by a band called The Orange Machine.
The box set consists of 4 loosely themed discs. The first one (and probably the best one) is called Sowing The Seeds. Sleeve notes read: The beginning of the journey without maps - fey folkies, beatniks out to make it rich, pilled-up mods, art-school dropouts, RnB hoodlums and mop-top beat merchants assemble like pied pipers at the gates of a new and strange dawn...

The disc starts with demo version of 'My Friend Jack' by The Smoke with the original lyrics which had very explicit drug references. The label, EMI, fearing that song could be banned from radio play forced The Smoke to change the lyrics, but the toned down version which was eventually released in February 1967 was banned anyway. It did, however, go to number 1 in German charts. Today, It's an undisputable pop-psyche classic.
Next, we get former Joe Meek's protegees - The Tornados (a line-up that did not feature any members from 'Telstar' era) and Screaming Lord Sutch giving a shot at Psychedelia with surprisingly interesting results.
What follows is possibly the most catchy song on the whole box set - 'Doctor Doctor' by The Frame. 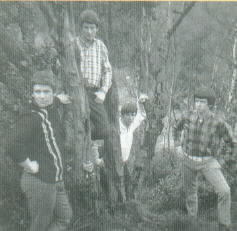 The Frame were a johnny-come-lately mod band which released ultra-saccarine 'Doctor Doctor' in early 1967. For some reason song failed to chart and The Frame split up soon afterwards. Their single, however is a true lost pop-psych gem.

Track 5 is a great mod-on-acid (Freakbeat) standard - 'Day And Night' by The Drag Set from 1967. I know this song quite well, as it's an obligatory play in Beat/Psych basement at New Untouchables clubnights. Great dance number indeed...

At the end of 1967 The Drag Set morphed into heavy rockers The Open Mind. They achieved a cult status thanks to their song 'Magic Potion' from 1969 which was an underground psychedelic blues-rock classic.

Another great track from disc one is 'The Lilac Hand Of Menthol Dan' by John's Children with Marc Bolan on vocals. The song was written by Marc Bolan, and recorded in midd-1967, but  never released, as Bolan quit the band soon after... 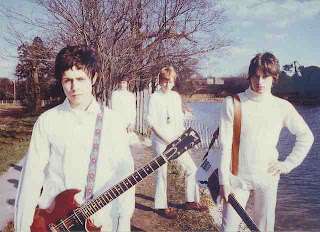 Another interesting track on disc one is 'Rubber Monkey' by Santa Barbara Machine  Head - a mod studio 'supergroup' consisting of former members of  The In-Crowd, The Birds and The Artwoods. Those members included John 'Twink' Adler (of The In-Crowd), Jon Lord of The Artwoods and Ron Wood of The Birds.'Rubber Monkey' , recorded in 1966 and released in 1968 as a part of Blues Anytime compilation, is a Hammond-led instrumental. By the time it was released, all the musicians involved moved on to bigger things: Twink and some former members The In-Crowd formed Tomorrow, Jon Lord started Deep Purple, and we all know what happened to Ronnie Wood...

Among those great obscurities there are some well-known songs: Sunny Goodge Street' by Donovan, 'Hippy Gumbo' by Marc Bolan, 'Circles' by Fleur de Lys, and one of my all-time favorites 'Up The Wooden Hills To Bedfordshire' By The Small Faces. There are also two songs by The Kinks - 'Fancy' from Face To Face album (1966) an Dave Davies'  'Love Me Till The Sun Shines' from Something Else (1968). Although The Kinks were one of the first bands to flirt with psychedelia as far back as 1965 ('See My Friends') they never turned fully psychedelic, not even in summer of 1967. They did however, record a few tracks that delicately hinted at psychedelia, like the two fore-mentioned ones, or great ''Creeping Jean' from 1968 (also written by Dave Davies).

Second disc is titled Plant A Flower Child Today. From the sleeve notes: Do not adjust your mind, there is a fault in reality...Psychedelia's high summer in full and glorious bloom as sweet floral Albion passes its London Social degree and sets the controls for the heart of the currant bun...

Songs that stand out are Skip Bifferty's 'Man In Black'..

'The Clown' by Eire Apparent..

Eire Apparent were an Irish band based in London. 'The Clown' is a great track from their 1968 album Sunrise, which was produced by Jimi Hendrix and it featured Noel Redding on bass and Soft Machine's Robert Wyatt on organ. 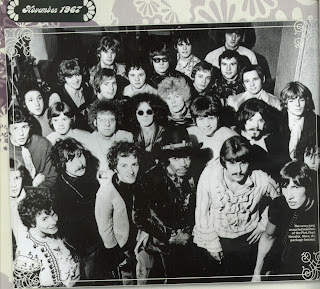 In 1967 Eire Apparent went on a package tour with Jimi Hendrix Experience, Pink Floyd, The Move and The Nice. 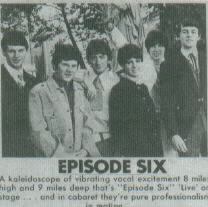 Disc three, probably the weakest one, is called Happydaytoytown (after Small Faces track). Songs that stand out are 'Nodnol' by Spectrum, classic 'Hey Mr. Carpenter' by The Fox, and Arthur Brown's novelty track 'Give Him A Flower'..

There is also a song by Gun titled 'Sunshine' - a b-side to their proto hard rock hit 'Race With The Devil' from 1968.

Now, I have a little bit of a problem with this track - It is one of the favorite songs of Noel Gallagher. It is not hard to see why.The formula presented by Gun on 'Sunshine' - nursery rhymes combined with simple repetitive chorus, is exactly what Oasis mastered 25 years later. In fact, if you take out the guitar solo, this song could easily pass for a lost Oasis track (I did spoil it for some, didn't I?)

Disc four is called Circus Days Are Here Again. Sleeve notes say: (referring the cult film Withnail & I) The slow, but inexorable slide into Prog Rock: both London and the Sixties swing themselves to a standstill, and party revellers wake up with a Camberwell carrot-sized hangover...

'My Gration Or?' by Opal Butterfly (1969) - psychedelic heavy rock gem - easily one of the best tracks on the whole box-set. 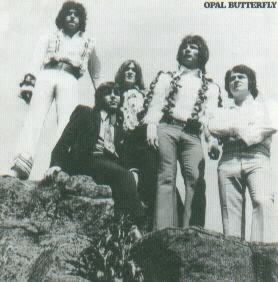 The ever-changing line-up of Opal Butterfly at some point included Dave O'List (ex member of the Nice and The Attack) and future heavy metal god Lemmy. A very different incarnation of this band had recorded an awful soundtrack to a film Groupie Girl in 1970.

Other great tracks from disc four are 'The Diamond Hard Blue Apples Of The Moon' by The Nice, 'Cold Embrace' by Sam Gopal (a Hendrix-style guitar freakout; Lemmy - briefly a member of Sam Gopal - played  bass on this 1969 song) and proggy 'Venus' by Samson from 1970.

All in all, It is a very enjoyable compilation. The only criticism could be that there are too many average songs on disc three - some of the tracks seem to have been dug out purely for the obscurity value.Also, putting the unreleased versions of 'hits' does not always work, either. It makes sense in case of  the Smoke's demo of 'My Friend Jack' seeing as the lyrics are completely different, but the BBC session versions of Arthur Brown's Fire (disc two) and Status Quo's 'Pictures Of Matchstick Man' (disc three) are barely discernible from 'official' versions. Wouldn't it make more sense to put a different track entirely, like for example, Quo's 'Ice In The Sun' or Arthur Brown's 'Spontaneous Apple Creation'?

For those who are new to the 60's British Psychedelia, I would also recommend few other compilations: John Peel's Perfumed Garden, Piccadilly Sunshine and first ten volumes of Rubble Collection (which is now available on Spotify). Also check out Marmalade Skies - one of the best pages devoted to 60's British Psych. It looks like hasn't been updated for a while, but it still contains a lot of interesting information, photos, links, etc..

I'll end with these wise words from John Peel... 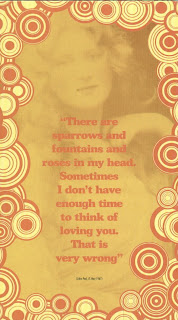 Enjoyed going through those, thanks. Favourite one was Paper Blitz Tissue. Not sure about that name though (even by the standards of the day!).

Great blog! Thanks for sharing it.

Just come across your blog via a link from another blog. Gosh what a nostalgia trip, I remember so many of these bands! The Frame were from the Midlands I think, I saw them play.
Going to watch the Groupie Girl film when I've a bit more time, I saw it at the cinema when it came out. Thanks for posting!

Great post! Dug this out and giving it a listen again as a result of reading this.
There were a number of these compilationsthat came out at the same time. There was a pretty good Mojo magazine 4 CD set that has some of what's here. There is also the Nuggets 2 box. Wonderful stuff.