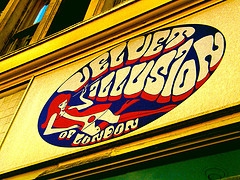 I will never forget my first visit to Camden Stables Market around 2004, and my excitement when I discovered Velvet Illusion  - a Psychedelic/Op-art boutique that sold clothes inspired by 1960's Swinging London.When I entered the shop, I felt like I was magically transported from 2004 to Carnaby Street circa 1967. 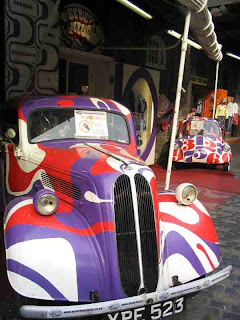 Ad for both Velvet Illusion stores from 2004.
First Velvet Illusion store was opened in the late 1990's on Kensington Church Street. The owner was an American called Mickey Wolf - an enthusiast of 1960's Fashion and Music. He personally designed all the clothes sold in his shop. His designs for menswear were strongly inspired by late 1960's Peacock Revolution and designers such as John Pearse (Granny Takes A Trip) or Mr.Fish. His womenswear was characteristic for the generous use of Bridget Riley-style Op-Art patterns. 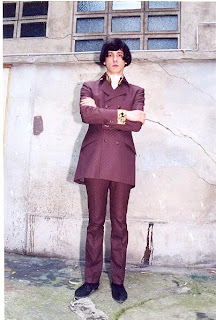 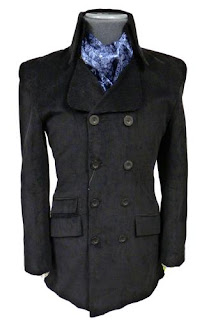 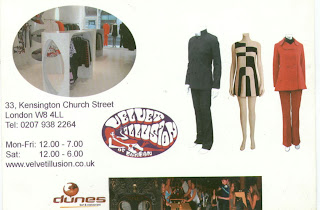 Flyer from 2004 advertising Velvet Illusion on Kensington Church Street
A short documentary about Velvet Illusion from 2004 featuring an interview with Mickey Wolf who lists John Pearse of Granny Takes A Trip and Mary Quant as his main influence. 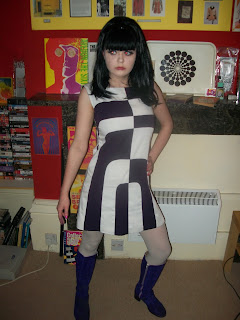 My girlfriend in her Velvet Illusion dress 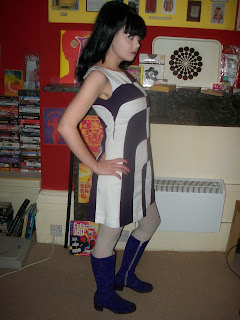 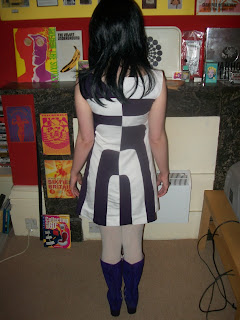 Velvet Illusion became a cult shop for Mods and 1960's obsessives, attracting customers from all around the world. Unfortunately, both branches of the boutique shut down in 2007. Some of their stock is still available from www.atomretro.com. Mickey Wolf relocated to Los Angeles, where apparently he opened Velvet Illusion USA (I say apparently, because I could not find any proof of that on internet - but if that is really the case, I  hope that one day he will open an online boutique).
Velvet Illusion Fashion show at Modstock in 2004.
Posted by Peter at 01:05

Sounds like a pretty cool shop. it's a shame that it closed down.

Yeah, it was a great shop,I loved it too,still have a few bits 'n' pieces that I bought from them..Atilla who worked there was the ultimate dandy,always dressed to perfection anytime that I met him, regency suit & cape etc,the best looking guy on the scene at the time!

Very interesting! I'd always wondered what had happened to the shop!

I loved that shop! It crowned the whole late 90s-early 2000s mod/psychadelic shopping experience. I know we can shop anywhere now with t'interweb, but it isn't 'quite' the same as a trip to Camden!

Great blog. Do you know Mendoza on Brick Lane? I covet their capes.