Emanuel Ungaro dress from the 1960's 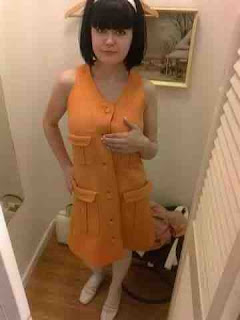 These days, it is not often  you see an original designer dress from 1960's outside fashion exhibitions. It is certainly rare to see them in charity shops. Needles to say, my girlfriend and I were stunned when we saw this orange sleeveless dress by Paris couturier Emanuel Ungaro in Help the Aged shop in Brighton. They certainly know what they have - the item is priced at £450. It is very early Ungaro (he started his own line in 1965) probably from around 1965 - 1967. The design is heavily inspired by Andre Courreges (for whom Ungaro worked prior to starting his own line).
Unfortunately, we could not afford to purchase this amazing item, however my girlfriend could not resist the temptation to try it on and take a photo ( I apologize for the poor quality of the photos, it has been taken on my phone). This dress is slowly becoming a talk of vintage obsessives in Brighton, but it is still yet to find the new owner. No one is willing to spend £450 , and so far charity shop had been rejecting various offers (the highest of which was £250, apparently). 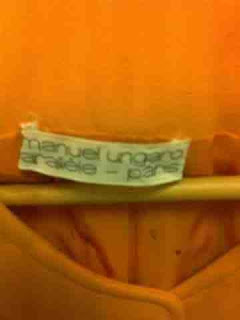 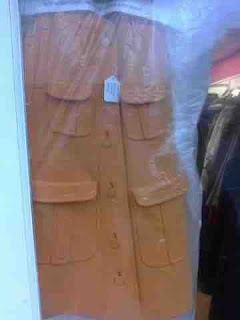 Wow how amazing! 450 pounds does seem overpriced even for a designer item considering it is second hand. I guess maybe some real avid collector will come and snap it up...

I've already had a bit of a rant about this over at Vintage Brighton. If they've had offers as high as £250, then it's insulting to the people the charity is helping NOT to accept it.

Who on earth settled on £450 and what's their reasoning? The label doesn't even look stitched in properly.

Not only the label was not stitched on properly, but there was a button missing as well!(as you can see on the photo my girlfriend has to hold her finger to cover the missing button).

Apparently, the manager of the shop is also a 'professional dressmaker'(which clearly is the same thing as vintage clothing expert)and it was her who priced the dress. It was also her who rejected the £250 offer. The volunteer I spoke to said that if it was up to her, she would have accepted £250, so it looks like it is just this one manager who is so stubborn.

I have seen the Vintage Brighton post, and I totally agree with what you said. Charity shops in Brighton overprice things terribly.Not all of them maybe, but certainly British Heart Foundation and Oxfam. And it's not just clothes - books and dvd's are often much cheaper on amazon than in Brighton Charity shops.I understand that it is for good cause but this is just a robbery. And like you said, they are also supposed to help people who cannot to buy books/clothes/dvds anywhere else.

And also, I pass that charity shop everyday, and i can safely say that it is pretty grubby. In a bad sense.

Gorgeous! Too bad it's so expensive (then again I expected it to be worth even more). What a super find for someone who just happens to have that kind of money lying about ;).

ah, such a dream!

I ended up with this same dress, it came to the Bognor Regis charity shop, I sold it on etsy and it found its way home back to Paris. The lady sent me a picture of the dress from a 1969 French magazine. Copy and paste the link below to see it in its original glory.