Girlfriends of The Rolling Stones modelling for Ossie Clark, 1967 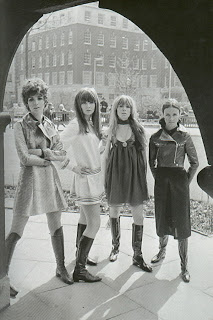 Swinging London royalty modelling clothes from 1967 winter collection by Ossie Clark and Alice Pollock (who at the time ran Quorum boutique on King's Road). From left: Linda Keith, Chrissie Shrimpton, Suki Poitier and Annie Sabroux. Three of these lovely ladies: Keith, Shrimpton and Poitier were famous for having dated a Rolling Stone. Chrissie Shrimpton, who,of course was Jean Shrimpton's younger sister, was Mick Jagger's girlfriend between 1964 and 1966. The disintegration of their relationship around 1966 was visible in Jagger's lyrics - "Out Of Time", "Yesterday's Newspapers" and "Stupid Girl" were all rumored to be about Shrimpton (Mick eventually dumped her for Marianne Faithfull). 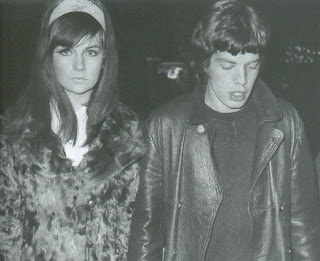 Linda Keith dated Keith Richards in 1966.She had played small, but important part in Jimi Hendrix's career - she introduced him to Chas Chandler, his future manager (and former bass player in The Animals). The story goes: Linda had accompanied The Stones and The Animals on a trip to the US in 1966. One night, she has accompanied Brian and Keith to The Cafe Wha, a seedy back streeet dive in Greenwich Village, New York, where the three had sat mesmerised as the young, left-handed virtuoso known as Jimi Hendrix had laid waste to his audience. Days later Linda revisited the cafe, this time accompanied by Chandler who, disenchanted with his life as an Animal, was on the lookout for pastures new. Linda suggested to Chandler that managing new acts could aid his departure from playing, and, if so, then young Jimi was the best place to start.
Having already made Jimi's acquaintance, Linda set about securing the guitarist's attention with more than just a buisness proposition. Her overtures to Jimi triggered the end of her liaison with Richards. It was finally extinguished when she repeated her suggestions to Hendrix some months later following his triumphant introduction to England (Terry Rawlings, Brian Jones: Who Killed Christopher Robin?, p 92).
When Richards started dating Brian's ex - Anita Pallenberg, Brian hooked up with....Linda Keith. But he didn't stop there. To complicate matters, he simultaneously started an affair with Suki Poitier - one-time girlfriend of Tara Browne. 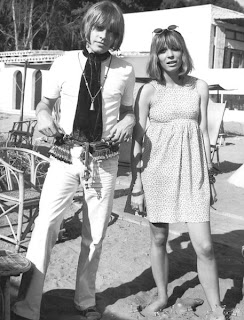 Brian Jones and Suki Poitier, 1967 (Photo from a collection of Ms. Jayme Franklin).

Considering the circumstances, I wonder whether Linda Keith and Suki Poitier were even on speaking terms during that Ossie Clark photoshoot... 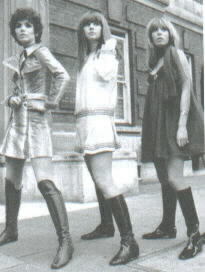