Where am I going, where have I been..

Apologies for going AWOL in the last couple of months. I won't bore you with the reasons why I had to put my blog on hold, but I will try to resume a normal service from now on. When I logged into my e-mail recently, I was pleasantly surprised to discover a rather large amount of very nice e-mails from the readers prompting me to continue with a this blog. The amount of followers doubled, and number of daily visits almost quadrupled since my last post. Frankly, I had no idea that this blog would generate such an interest. I'd like to thank everybody who reads this blog, leaves comments or share it via facebook. One of the most exciting surprises was when I found out that the list of my readers evidently includes Andrew Loog Oldham - a man who discovered and managed The Rolling Stones throughout 1960's. Mr. Oldham used  a photo of my lovely girlfriend on his official facebook page as an example of 'contemporary modette'. That is quite a complement indeed (Many thanks to Peter Markham for bringing it to my attention - I am not a facebook user anymore - I left last year, when I realized everybody on it annoyed me). I am always thrilled when somebody who 'was there' in 1960's complements this blog.

Speaking of people who 'were there' - during my time away from internet, I have met David Bailey after a interview/Q&A session he did in Victoria and Albert Museum in June. 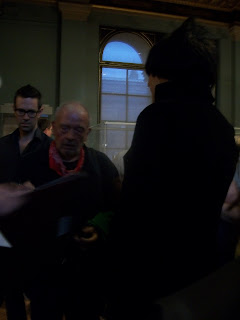 David Bailey with Yours Truly, June 2012

The interview/Q&A itself is not much to talk about, really. Straight from his all-day photoshoot for Vogue, where, at 74, he still is a top photographer, David Bailey was not in the mood for serious discussion. His evasive answers however, were so charming ,witty and funny, that I doubt anybody in the audience was disappointed. When asked about "We'll Take Manhattan" - a recent BBC dramatisation of the story behind first New York trip with Jean Shrimpton in 1962  (and that famous photoshoot they did there), Bailey replied that he liked Aneurin Barnard, who played him, but thought that Karen Gillian (who portrayed Shrimpton) completely lacked that special quality that made Jean Shrimpton such a great model.
He talked about  various fascinating people he photographed over the years and his experiences with them, the pleasant ones (like photographing Sir Laurence Olivier shortly before his death) and the unpleasant ones (an aborted session with Oskar Werner - a German star of "Jules and Jim" who tested Bailey's patience, first by commanding him to turn off the pop music and putting some Beethoven on, and then complaining that he was an actor, not a model. Bailey eventually told him to 'piss off').
When asked , whether there was anybody in the world he wanted to photograph, Bailey replied: "Anybody in this room.." 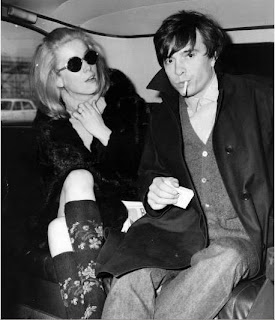 The way he'll be remembered: David Bailey with his then wife, Catherine Deneuve in 1966

After the Q&A session (during which I wanted to ask him about what happen to his 'lost' film  - G.G. Passion from 1966, but I lacked courage, and anyway, I doubt he would have given me a straight answer) I got him to sign my tarnished copy of British Vogue from September 1966 (cover photo was shot by Bailey, obviously). 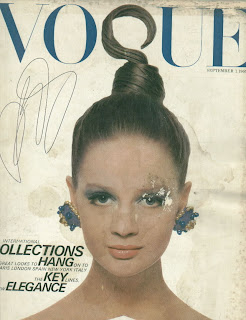 Anyway, there it is, my first post in six months. More will follow soon, so do watch this space.

Glad you're back... love this blog.

Lovely to see you back, sir!

That's the trouble with these people from 'then', they have selective memory and are fiendishly evasive sometimes.

Geia sou( means "hey you" in greek)! Welcome back, take care of your cool blog :)

So glad you're back! That's so cool that he used the picture.

Glad you're "back" keep the faith (and up the good work)!