London In The Sixties by Rainer Metzger 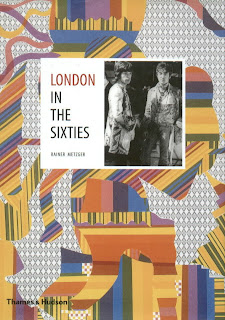 In the recent few years, there has been a surge in numbers of new publications about 1960's London. The subject continues to fascinate fashion historians (like Richard Lester or Paul Gorman), pop historians (Barry Miles, who must have published at least a dozen books which touched upon a subject one way or another) or historians in general (Dominic Sandbrook, Jonathon Green, Arthur Marwick). Then, of course, there are all the photographers' albums, Taschen coffee table books, biographies and autobiographies of designers, pop stars, film stars and etc. London In The Sixties - Rainer Metzger's book published earlier this year by Thames & Hudson , does not quite fall under any of these categories, and although it is probably the closest in spirit to a coffee table book, it offers far more in-depth critical analysis. It is an ambitious attempt of analising every major form of art and culture that was happening in 1960's London - art, design, fashion, pop music, cinematography, theatre, literature, architecture and television. With 342 illustrations on 365 pages it does manage to get a point across really well. The book is a part of the series by Thames and Hudson about revolutionary cities in revolutionary (in cultural, not political sense) times. Previous books include: Berlin In The Twenties, Munich - Its Golden Age of Art And Culture (both by Metzger), Paris Between The Wars, and Vienna 1900 and The Heroes Of Modernism. Given the main subject of previous publications, it is not surprising that Rainer Metzger devotes a lot of space to painting and graphic design. The works of Richard Hamilton, Peter Blake, Eduardo Paolozzi, David Hockney, Bridget Riley, Pauline Boty are thoroughly analised and put in a social context. Same goes for illustrations of Alan Aldridge, Martin Sharp or Hapshash and The Coloured Coat. There is a competent review of cinema -  from early 1960's kitchen sink dramas - films of Tony Richardson, John Shlesinger and Karel Reisz through, of course, Blow-Up and swinging comedies of Richard Lester to decadent excesses of Donald Cammell's Perfomance. The importance of fashion is outlined through mentions of Mary Quant, John Stephen, Ossie Clark, King's Road boutiques and 'obligatory' images of mini-skirted dolly birds  strolling down Carnaby Street. Rainer Metzger also takes a look at the brutalist architecture of Erno Goldfinger , television programs such as The Avengers and The Prisoner, Germaine Greer's The Female Eunuch, The Anti-Vietnam protests and rise of counterculture , and many other cultural events that shaped 1960's London. Then, of course, there's the Pop Music. In this section, quite a lot of (and by quite a lot, I mean slightly too much) space is devoted to The Beatles. Let's face it, The cultural importance of  the Fab Four had been written about to death, and for some readers any mention of it is an instant page turner. What's more, there are some mistakes in the chapters about pop music. For example this photo on page 175: 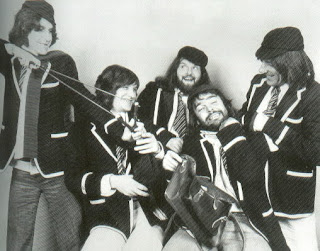 It is captioned as 'The Kinks, c. 1967'. But actually, the photo is from 1976, when The Kinks were promoting their album Schoolboys In Disgrace (Hence the uniforms) released that year. John Dalton and John Gosling (the bearded ones on the photo) joined the band in 1969 and 1971 respectively, and were not in the line-up of The Kinks in 1967.
Similar mistake is on the page 223, where this photo of  Mick is dated 'January, 1969'. 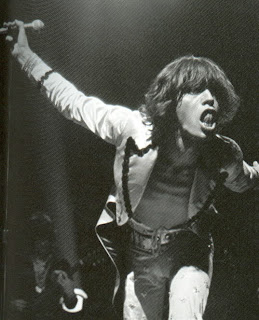 But, in reality, the photo is from 1972, and I know it because Mick is wearing Ossie Clark stage outfit custom-made by Ossie himself especially for that 1972 American tour. Also, The Stones did not tour in January 1969, in fact they did not play any gigs between Rock n' Roll Circus (December 1968 - it was Brian Jones' last gig with The Stones) and Free Concert in Hyde Park (July 1969 - Mick Taylor's first gig).

Ok, so these are not massive mistakes, but any kind of mistake is surprising in such a high-profile publication. Perhaps Rainer Metzger - an Art History professor at University of Karlsruhe - was not that familiar with Pop history. Or maybe his team of researchers had let him down. Either way, it is a proof that you can't always trust what you read, no matter how respectable the publication might be.

The book could be described as 'Swinging London for Dummies' - if you have a good knowledge about 1960's London , there is little chance that this book will tell you something you don't already know. Still, it has enough great photographs to make it enjoyable. Some of the images might be interesting for readers of this blog.. 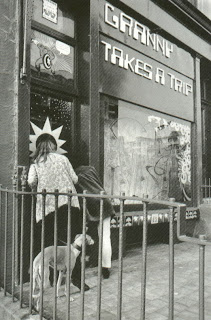 Early incarnation of Granny Takes A Trip, circa 1966. 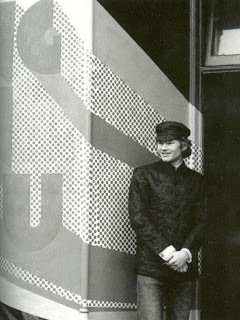 Michael Rainey outside his boutique Hung On You 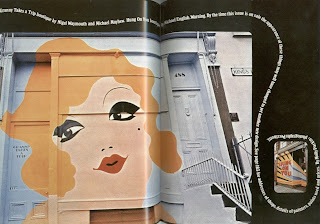 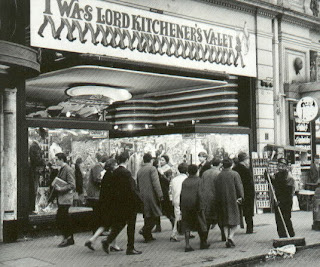 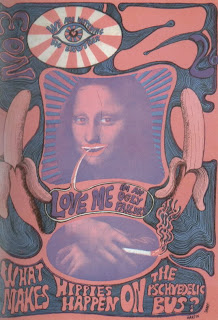 Cover of OZ magazine from April 1967, designed by Martin Sharp. 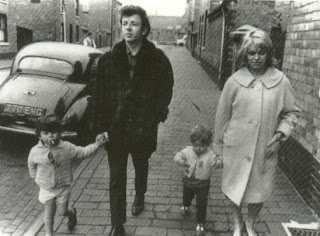 Ray Brooks and Carol White in Cathy Come Home (1966)- an uber-depressing and brutally realistic debut feature of director Ken Loach. The film tells a story of working class family which, as a result of various misfortunes, is forced to live a life of poverty and homelessness. This rarely mentioned but nevertheless important film highlighted many social issues of the time, and served as a sad reminder, that for most of the people in  1960's Britain, life was not ''Swinging' at all.  The surprising inclusion of it in the chapter about movies shows that Rainer Metzger tried to avoid easy cliches and explore the darker side of the 1960's. 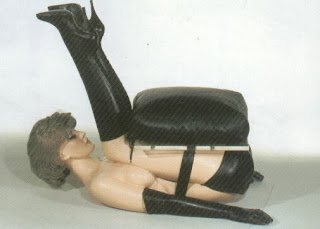 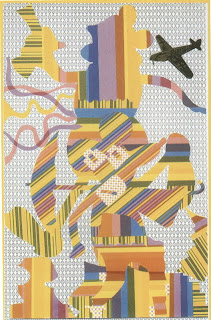 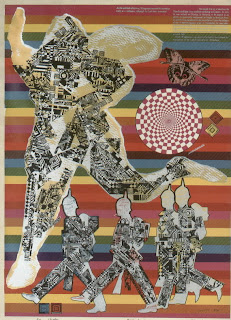 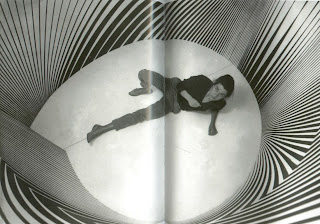 Bridget Riley inside her installation Continuum, 1963 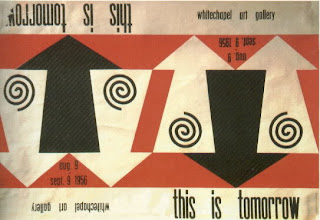 Poster for This Is Tomorrow - a very influential 1956 exhibition in Whitechapel Art Gallery which predicted direction art and design would take in 1960's.

Overall, London In The Sixties is a really enjoyable book, and I'd recommend it to anybody interested in the subject. It would also make a great Christmas present...
Posted by Peter at 13:24