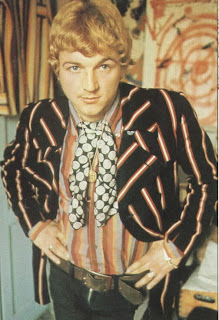 Perhaps 'an icon' is not a right word here. But Tara Browne had become something of a cult figure - mostly among Beatles fans - since it was his death that inspired the lyrics of "A Day In The Life" (Little known fact: his death also inspired another song: "Death Of The Socialite" by The Pretty Things).
Born in 1945, The Hon. Tara Browne was a son of Dominick Browne, the 4th Baron of Oranmore and Browne and Oonagh Guinness  - an heiress to the Guinness fortune. After completing  his education in public school in Paris, he came to London, and, like other 'hip' aristocrats in Swinging London, he invested money in a tailoring venture - Foster and Tara. He provided financial backing for tailors Pops and Cliff Foster. Foster & Tara initially were making clothes on order for boutiques such as Granny Takes a Trip, before Tara decided to open his own boutique - Dandie Fashions, which would exclusively sell F&T designs. 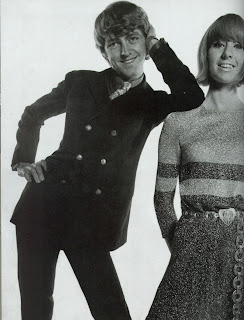 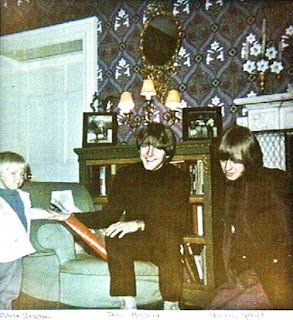 On  December the 18th, 1966, Tara was driving his Lotus Elan through South Kensington with his mistress, model Suki Poitier - the was on their  way to meet decorators Binder, Vaughan & Edwards to discuss designs for the shopfront of Dandie Fashions. While passing the junction of Redcliffe Squre and Redcliffe Gardens, he "didn't notice that the light had changed", and crashed the car with a parked lorry. He died in hospital few hours after (Suki Poitier survived, and soon started dating Tara's friend - Brian Jones).He was 22. The following day, Tara's friend John Lennon picked up a copy of Daily Mail which contained the article about the accident. The rest is a well-known story... 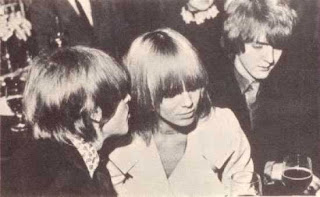 Apparently, Irish writer Paul Howard is currently writing a biography of Browne. He interviewed several close friends of Tara's. One of them, Hugo Williams shared some of his memories of Tara on The Spectator website: At 15, in 1960, Tara was barely literate, having walked out of dozens of schools. He smoked and drank but he hadn’t got on to joined-up handwriting yet. He was living at home with his mother Oonagh Guinness and her third husband, a louche Cuban ‘shoe-designer’ presently named Miguel Ferreras, who was gaily going through her fortune. Tara was two years younger than me but years ahead in sophistication and fun, dealing jokes, insults and ridiculous boasts from an inexhaustible deck like a child delightedly playing snap. In his green suits, mauve shirts with amethyst cuff-links, his waves of blonde hair, brocade ties and buckled shoes, smoking menthol cigarettes (always Salem) and drinking Bloody Marys, he was Little Lord Fauntleroy, Beau Brummell, Peter Pan, Terence Stamp in Billy Budd, David Hemmings in Blow-Up. His drawly Irish blarney was the perfect antidote to our public school reserve and what would come to be called ‘postwar austerity’.

All the white-gloved pre-debs doing time at Paris finishing schools found their way to Oonagh’s apartment, where they encountered their first taste of Sixties hedonism, without Daddy being around to say no to drinks and cigarettes and staying up past their bedtime. There was the chauffeur-driven Lincoln Continental to conduct us to the clubs and swimming-pools. There was fresh milk in the fridge picked up daily by the Irish butler from the American embassy canteen, the only place in Paris where you could find it in those days. If there was any embarrassment about money Tara would pretend to find a ‘dix milles’ note in the street.

Tara could hardly have failed to be a success in Swinging London. While I was wandering around the globe in ’63 and ‘64, he embarked on the second and last phase of his meteoric progress. He got married, met the Stones and the Beatles, opened a shop in the King’s Road and bought the fatal turquoise Lotus Elan in which he entered the Irish Grand Prix. He let me drive it once in some busy London street: ‘Come on, Hugo, put your foot down.’ I had just got my first job and our ways were dividing. His money and youth made him a natural prey to certain charismatic Chelsea types who turned him into what he amiably termed a ‘hustlee’. He reputedly gave Paul McCartney his first acid trip. The pair went to Liverpool together, got stoned and cruised the city on mopeds until Paul went over the handlebars and broke a tooth and they had to call on Paul’s Aunt Bett for assistance. There is still a body of people — and a book called The Walrus is Paul — who believe that Paul is dead and is now actually Tara Browne with plastic surgery. 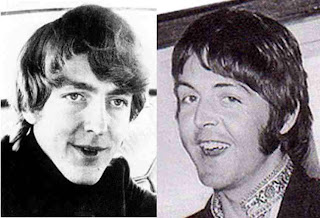 Everyone has got some golden boy or girl in their life whose death or sudden departure distils the period into the long party it should have been but probably never was. When my first girlfriend was trying to think of something really nice to tell me she came up with ‘Your eyes are nearly as nice as Tara’s’. I remember being tremendously pleased about this and could hardly wait to tell him. I discussed titles for the book with Paul Howard and there seemed to be no choice: A Lucky Man Who Made the Grade"

Sounds like a very interesting character. Facinating to learn about his death and the song lyrics. Day In A Life is such a wonderful song and I'd always wondered about those lyrics.

The material Tara's jacket is made of in the top pic is incredible! Amazing that all the p[retty young things were dying so young. How dies it feel to be one of the beautiful people? There's some cool anecodotes on him in Jonathon Green's "Days In The Life:Voices from The English Underground".

Here's a French film about and featuring Tara from 1966.

Found this video on youtube which is dedicated to Tara Browne -

Why would Tara Browne choose to hang around with Paul McCartney during Christmas, when he's got his own family, which just had a new baby born into it. He was a Dad. Why is he going around mopeding during the holidays.

I think there is sufficient evidence to suggest that he may have been a victim of foul play...maybe the nightclub investments and the Kray brothers connection or perhaps he was just considered too great a threat to the Establishment and British High Society. After all, he came from and was thoroughly versed in the secret machinations of the Elite but yet he was preaching sex, drugs, and rock n' roll while hanging out with the likes of Kef and Brian Jones.

Paul McCartney has said that he was the one who met Tara Browne first in a London club,I think the same club that he met Linda McCartney at a year later and he said that Tara was a good friend of his,

My grandfather is Cliff Foster, partner to Tara Browne of Foster & Tara Tailoring.