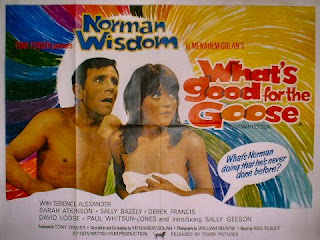 I have been meaning to post something about this film for a long time. 'What's Good For The Goose' is a slightly forgotten British comedy from 1969. Just like 'Here We Go Round The Mulberry Bush' or 'Smashing Time', it is another example of the film which tries to catch the spirit of the sixties, and satirize it at the same time.
The film features popular comedian Norman Wisdom, at the height of his career and  Sally Geeson (younger sister of Judy Geeson) at the beginning of hers. 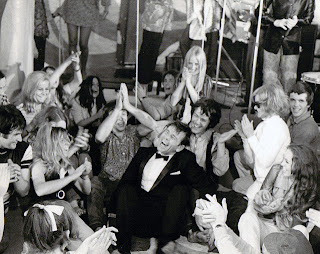 Wisdom plays Mr. Bartlett - a London bank executive, who gets sent to represent his bank at the conference in Southport. The monotony of Mr. Bartlett's daily life is brilliantly depicted in a speeded-up footage during opening credits - we can see his daily travels from his house at the suburbs to the City, small talks with clients and colleagues, lunch eaten at the desk, being stuck in the traffic during the rush - hour, more routine small talks with his wife and two children during dinner, etc.
En route to Southport, he picks up two hitch-hiking hippie girls - Nikki (Sally Geeson) and Meg (Sarah Atkinson). Not that he has much choice - they pretty much invite themselves to his car, while he stops at the petrol station and they make themselves comfortable despite his initial protests. But after a while , he finds that they make rather charming travel companions. He is especially in awe of free-spirited Nikki. He drops the girls off in Southport and checks into the hotel, where the conference is held. During the conference, Mr. Bartlett has trouble concentrating as he can't get Nikki out of his mind. In the evening, when all of his fellow bankers hit either a bar or a local brothel, Mr. Bartlett wonders around town hoping to bump into Nikki. He finally finds her in a psychedelic club called The Screaming Apple. He buys drinks for all her friends (which makes him instantly popular) they dance, and after the club shuts, Nikki comes back with Mr. Bartlett to his hotel room. They start a brief fling. 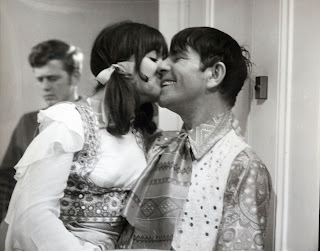 Over the next few days, embraces the lifestyle of his new, young friends. He exchanges his three-piece suit and bowler hat into psychedelic/peacock "gear" from the new, "fab" boutiques - paisley shirts, kaftans and satin trousers in every possible colour. His new found love makes him more happy, energetic and self-confident than ever before. Unfortunately he will have to eventually realize that Free Love has also its dark side. 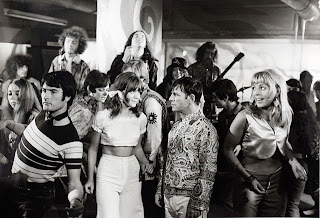 The film offers typical gags that can be found in comedies about generation gap and midlife crisis, but unfortunately, not much more. It is enjoyable, although the bizarre ending leaves the viewer wondering what was the point of the story. Readers of this blog , i.e. fans of sixties music/fashion should certainly like it. Lovely Sally Geeson is certainly a good reason to watch this film. Another would be the scenes set in the psychedelic club, where you can see The Pretty Things (performing in the film as Electric Banana) - a great mod-turned-psychedelic band playing songs from their 1969 album Philippe De Barge.
I wonder if Southport had swinging places like this in real life!
I'd recommend "What's Good For the Goose" to anybody who liked "Here We Go Round The Mulberry Bush", "Smashing Time" or "There's a Girl In My Soup". It has been released on Dvd few years ago, so it should be widely available.
Posted by Peter at 20:08

Dear Mr. Dandy, your blog is very cool (thanks for the add).
If you agree I'd like to put "A Dandy in Aspic" in my "beautiful places" and, if you like Magic Mac, I'd like you do the same. Thanks again and hold on!

The Pretty Things/Electric Banana did the music for the Horror Film from 1968 'The Haunted House of Horror' which is pretty naff but has some great footage of Carnaby Street and the fashions of the time.

It's not available on dvd but was shown on BBC2 last year. If anyone needs a dvd copy, just let me know and I can make one for you.

UPDATE: Both 'The Haunted House of Horror' and 'What's Good For The Goose' have just been released on DVD for £7.99. Just ordered my copies.

I've watched that trailer, Ha Ha! it can't be a great piece of cinema, if Frankie Avalon is in it, but it looks like it has certain kind of charm, just like Hammer films. I enjoyed "Dracula A.D. 1972" so I might enjoyed this one as well. Thanks for the recommendation, I'll try to get it!

It's not a great film by any means, but does show the sixties in full swing through the clothes, music etc which is it's charm. The lead works in Mates on Carnaby Street so there are a few great shots of it in the film.

Apparently Bowie was meant to play the lead character but dropped out. Definitely worth a watch. I took some shots of Carnaby street this summer, will upload to my blog: www.rl81.blogspot.com